A century on – The start of the Battle of Dublin recalled 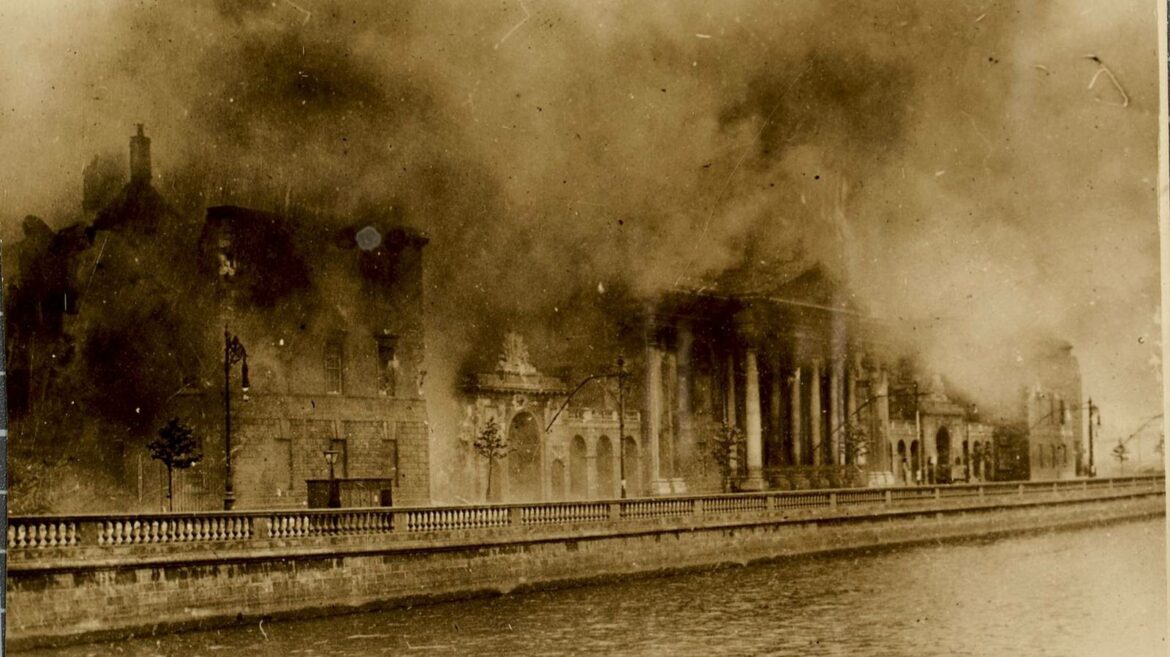 When we are watching the news these days we often see bombed and destroyed cities and we cannot imagine the same thing happening to our own city, but one hundred years ago it was Dublin that was in flames, with artillery barrages cracking in the night.

This was the beginning of the Irish Civil War. After Michael Collins and the rest of the Irish delegation agreed to the demands of the British government, many in the Dáil were disgusted by the concessions made. Although, as it turned out, a slim majority did agree that the alternative, to continue fighting against the British forces, was no longer possible. Many could not swallow the division of the country, however, and even more vexing was the oath of loyalty that all Irish TDs would have to make to the King of England. As such, the Treaty was approved. Despite this, many TDs and many more in the IRA believed that the Treaty amounted to a betrayal by their leadership as it did not secure Irish independence.

Tensions boiled and 200 anti-Treaty IRA men barricaded themselves in the Four Courts Building. In response to this Éamon de Valera, the leader of the anti-Treaty side, tried to join with Collins in the upcoming election, however despite this, up until a general election was called and on June 20th 1922 pro-Treaty candidates won in a landslide which led to a widespread adoption of the Treaty.

This amounted to an approval by the people of the Anglo-Irish Treaty. However, the IRA in the Four Courts were unmoved and remained, hoping to stir up tensions with the British. And that they did. The British were terrified that this would allow the spread of anti-British sentiments across Ireland and cause a war, as such, they ordered the Four Courts shelled. This order was stalled, but after the anti-Treaty IRA kidnapped the deputy chief of staff of the National Army General J.J. “Ginger” O’Connell, something had to be done.

In response to this and due to pressure coming from London the order was given to send an ultimatum to the IRA forces inside the Four Courts. After this was ignored, at four in the morning 28th June, the National Army began shelling the building with artillery given to them from the British Army. This was the start of the Battle for Dublin and the Civil War.

On the morning of June 28, 1922, the national army of the Provisional government, under pressure from the British, opened fire on the IRA who had barricaded themselves inside the Four Courts. “The Provisional Government hoped for a quick, decisive victory over the Anti-Treaty opposition… When the Four Courts was shelled, it appeared that the Anti-Treaty IRA had suffered a brief schism, and therefore would be easy to subdue,” writes Ian Morrissey, who is currently researching the Irish Civil War in UCD and has offered invaluable comments on the Battle of Dublin to the Gazette.

The IRA were indeed divided, with leadership disagreeing with the Four Courts garrison on how to fight the battle. The Dublin No. 1 Leadership requested aid from the other units across the country, but received few responses and those who did were unable to link up with the IRA forces trapped inside of Dublin.

The other sites occupied by the IRA appeared to serve no concerted purpose – these  included ‘The Block’ which was concentrated on the Gresham and Hammam hotels on the eastern side of O’Connell Street and IRA fighters were occupying seemingly unimportant buildings south of the Liffey on the South Circular Road, York Street and Dolphin’s Barn.

After such setbacks and facing an overwhelming foe, the IRA considered surrender and eventually acquiesced to pressure on 30th June laying down their arms and giving themselves over to the government forces. “The presence of politicians such as Éamon de Valera, Robert Barton and Seán T. in ‘The Block’ suggested that the occupation of Upper O’Connell Street was more of a political exercise, a form of propaganda of the deed, rather than a rational military operation.. When emerging from ‘The Block’ on the last day of the battle on the 5th of July, Brugha sustained injuries which would result in him becoming the first of many high profile fatalities of the Irish Civil War. But his was not the last death in Dublin; IRA ‘hit and run attacks’ continued in Dublin until the 9th of July when 4 men were killed in two separate attacks.”

“The National Army emerged victorious at the end of the battle, with the capital now under the control of the Provisional Government. Over 700 IRA fighters and activists were taken prisoner while many more were forced to flee Dublin mostly for Munster when a planned counter attack from Blessington failed to materialise. Michael Hopkinson estimates the death toll of the battle to be 65, and the valuation of property damage to be at least £3 million. The ‘incidental rather than intended’ destruction of the Public Record Office during the Four Courts siege would also continue to cause controversy for some years to come,” Concludes Ian Morrissey.