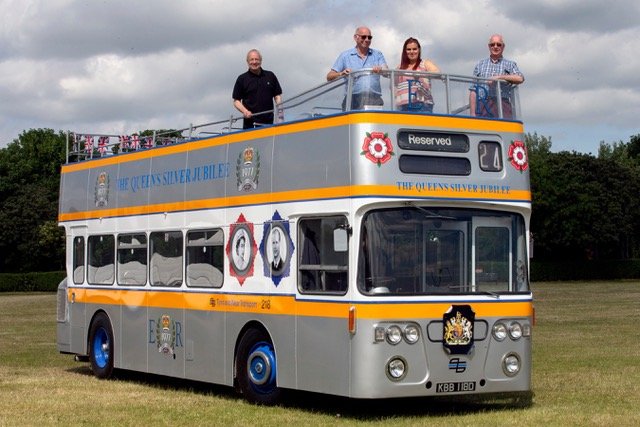 A former Dublin city tour bus has been restored in North East England, following the discovery of its connection with the famous American professional boxer and activist, Muhammad Ali.

Enthusiasts from the North East Bus Preservation Trust brought the open top bus to the UK from Dublin in 2016 and have spent the last six years saving it from the scrap yard after learning that the vehicle was used to transport heavyweight boxing legend Muhammad Ali during his famous visit to Tyneside in 1977.

Thousands of fans lined the streets as the heavyweight champ travelled through the centres of South Shields and Newcastle.

The group of bus enthusiasts is made up of current or former transport industry people who share a passion for public transport and its heritage. Over the last six years the 1960s Leyland Atlantean has undergone major restoration work. The whole open top deck had to be renewed due to water damage and its brakes, seats, floors, dashboard, lights, panels, radiator and engine have been upgraded. After thousands of hours in the workshop, the bus is back on the road.

The bus had previously been purchased from a scrap dealer by an Irish tourism company that used it to ferry sightseers around Dublin in the late 1990s. The vintage bus experts stepped in when the vehicle began to breakdown.

Steve Griffin, a member of the restoration team, said: “Initially we were unaware that it was the Muhammad Ali bus. It was only when we had two similar buses and had to decide which one to restore that I did a bit of digging.

“I knew that model had been used to drive Ali around the North East and research showed it was this bus. I noticed the registration number was the same as the one Ali had travelled on, so that was when we knew we had that one on our hands and it was the point that we knew we simply had to restore it.”

A grant from the National Lottery funded the new bodywork, while the volunteers spent long hours carrying out a mechanical and electrical overhaul.