Long-standing family business Churchtown Stores has closed its doors after 30 years of business.

It closed yesterday (January 31st) after brothers Kieran, Fehan and Barry Flood decided to retire. They opened up the hardware shop on the last day of February in 1988, a leap year, after running a hardware and electrical shop in London for 25 years previously.

A haven of all things hardware, the Braemore Road shop was bursting with anything and everything.

The brothers, originally from Westmeath, know most of their customers by name and many are sad to see the shop close. The decision to retire last year was a tough one for the trio. 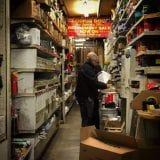 Churchtown Stores have closed their doors for a final time as the owners retire.

“We’re very disappointed that we have to close it down,” Kieran Flood said. “We have sold it and we had no difficulties selling it. We are very pleased with who purchased it.”

The brothers are known as the ‘go-to’ people of being able to source what their customers need. “What people want, if it’s reasonably within our sphere, we will get it. It’s as simple as that.”

The store was constantly packed and locals from all over Churchtown, Dundrum, Ballinteer and beyond have been paying tributes to the iconic local store.

Facebook page Ballinteer Today received hundreds of nostalgic comments from saddened punters at the announcement of its closure.

“End of an era. Fantastic shop with extremely knowledgeable staff who would do anything for you. We always referred to it as Bill and Ben’s.” one comment read.

Comments from others read: “A really great shop, a big part of Churchtown, could always get what you needed there. It will be sadly missed.”

Ripples of anger as pool not on area plan

Getting in the mood

House prices in Dublin city to rise by...

Criticism after Dundrum ‘excluded’ from Festival of...

23/10/2019
We use cookies to ensure that we give you the best experience on our website. If you continue to use this site we will assume that you are happy with it.Ok