THERE was “absolute carnage” at the 3Arena last week as concertgoers’ bags were found dumped outside in the rain after the Eddie Vedder show.
Heightened security measures at the venue saw new rules introduced where bags “bigger than an A4 page” are not allowed.
The 3Arena issued a notice ahead of the shows outlining the new rules, but many ticketholders were not aware due to the short notice given and were told to leave their bags at security and collect them after the gig.
However, when the show ended, the bags were not where they had been left and instead the concertgoers found their bags unattended outside in the rain.
The same thing is alleged to have happened the previous night at a Michael Bolton show.
A source who was present on the night told The Gazette that the bags were scattered outside under the pouring rain, saying: “It was absolute carnage.”
They added: “Peoples’ belongings strewn all over the ground in the rain; no way to determine who owned what – it was a free-for-all.”
Another person told The Gazette that she was “shocked” to find her bag left unattended outside the building.
She said: “I totally see the point [of the security measures] but I wasn’t told my bag was just going to be left outside when I left it with security. It was a bit disrespectful.
“I was peeved at the time, but looking back, we were warned. I wasn’t told they [the bags] were going to be thrown out of the building though.” 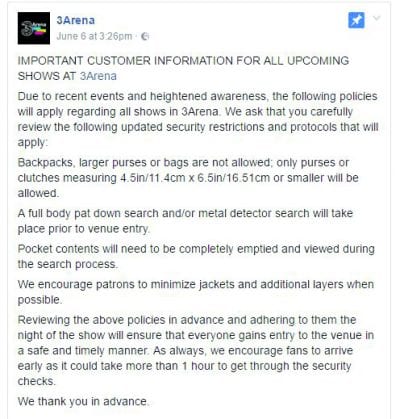 The 3Arena had issued a statement ahead of the gigs (see inset, below) outlining its updated security restrictions and protocols.
It stated: “Backpacks, larger purses or bags are not allowed; only purses or clutches measuring 4.5in/11.4cm x 6.5in/16.51cm or smaller will be allowed.”
However, the annoyed source told The Gazette that while warnings were issued ahead of the show, there were no warnings “about how bags will be dumped outside in the pouring rain if you don’t adhere to the security requirements”.
They added: “Security weren’t looking after the bags either – literally anyone could have walked up and had a lucky dip.”
In response to the issues raised, a spokesperson for 3Arena told The Gazette that restrictions on items were clearly identified on its website and via social media posts.
The security ban on certain items is echoed across the city, with organisers MCD warning that backpacks large bags, and bags larger than an A4 page, along with plenty of other items, won’t be allowed at the Robbie Williams (left) gig at the Aviva Stadium this weekend.
Across town, and similar bans and restrictions also affect what people can bring into the The 1975 gig this weekend at Malahide Castle.
Music fans are urged to check all bans in place at venues before taking in any gigs this summer.

BMW bounces back with latest 5 series

Celebrating all that is unique about Dublin

Solicitor charged with theft and perverting course of...

Catch a glimpse of a bus driving...

12/12/2019
We use cookies to ensure that we give you the best experience on our website. If you continue to use this site we will assume that you are happy with it.Ok