Dublin Zoo staff were thrilled to announce the birth last week of the latest arrival at the bustling tourist attraction – a male Asian elephant calf.
Estimated to be a metre tall and weighing approximately 130kg, the calf was delivered last Monday at the end of a 22-month gestation period for his mum Yasmin.

As her fourth calf, the as yet unnamed male is the sixth elephant calf born at Dublin Zoo in less than three years, and he will join the herd of 10 Asian elephants, including his dad, Upali, in the Kaziranga Forest Trail.
It is estimated that only 30,000 to 60,000 Asian elephants remain in the wild, with the largest population found in India, leading to the latest birth at Dublin Zoo being hailed as part of the international breeding programme established to assist the breed’s survival.

Gerry Creighton, operations manager at Dublin Zoo, said: “The birth of an Asian elephant is an amazing spectacle and this was no exception. The arrival of the calf was greeted with celebratory trumpeting and each member of the herd, from the oldest to youngest, played a role in assisting with the birth.
“We’ve been on an incredible journey over the past three years, overseeing the birth of six elephant calves, placing Dublin Zoo as one the most successful Asian elephant breeding programmes in the world. We’re very proud of the expanding herd and seeing the 11 elephants together will be a wonderful sight for visitors to the zoo over the summer.”
The zoo is inviting the public to come up with a name for the new arrival, based on his Asian origin; names can be submitted online at www.DublinZoo.ie. 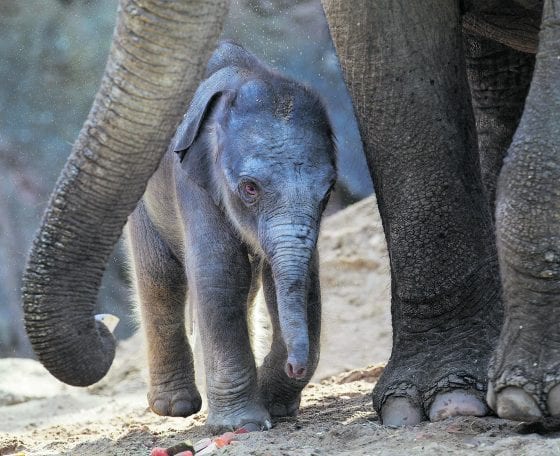 The calf was welcomed by its herd with celebratory trumpeting

To see the new arrival taking some of his first steps in the world, visit the Kaziranga Forest Trail in Dublin Zoo, which is open seven days a week from 9.30am to 6pm. For further information on the zoo, see www.facebook.com/dublinzoo, or www.dublinzoo.ie.

Lambert to step down after 17 years at helm

Family of foxes a ‘morale boost’ at...

Cry Monster Cry are back on the...

31/03/2016
We use cookies to ensure that we give you the best experience on our website. If you continue to use this site we will assume that you are happy with it.Ok