The compact SUV market is booming across Europe as drivers aim to downsize for greater economy and lower CO2 emissions. Volkswagen has joined this segment of the market with a new T-Roc model that’s attractive to drive. Michael MoroneY found that it comes with style and features to make it an enviable choice. 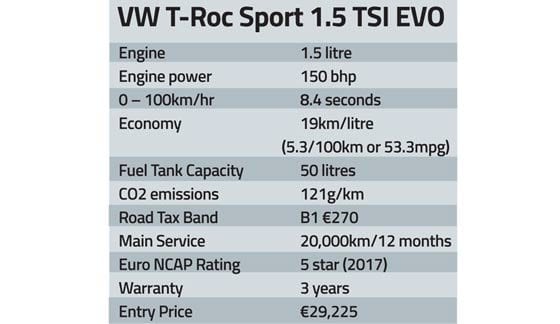 Volkswagen has a third SUV for the Irish market with the recent arrival of the T-Roc, the new compact SUV in the range.
This new Volkswagen T-Roc is the new entry level SUV for the Volkswagen range, coming is below the popular Tiguan.

The entry-level T-Roc specification comes with Volkswagen’s well regarded 1.0-litre TSI petrol engine that’s rated at 115bhp, while the test car that I had on the road was fitted with the larger 1.5 litre TSI engine that comes with a 150bhp rating.
The TSI code means that the car is petrol powered and has a neat turbo-charger fitted for that extra power boost.

Volkswagen has been best known for its diesel heritage, which was severely tarnished with the diesel-gate scandals.
That’s probably why it came as no surprise when Volkswagen Ireland offered me the opportunity to test drive the new T-Roc, with a petrol fuelled engine. 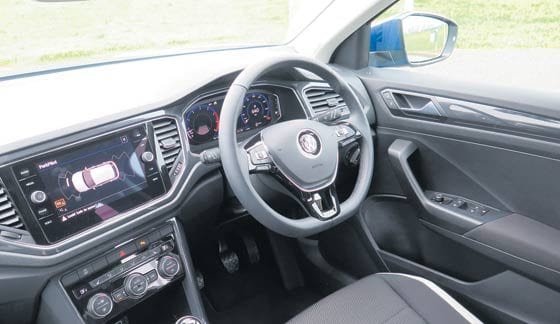 Volkswagen is offering a single diesel engine alternative for the T-Roc, that’s the 2.0-litre version also rated at 150bhp. This is the only version that offers Volkswagen’s 4Motion four-wheel-drive system. This diesel engine option delivers significantly more torque than its petrol alternative, but there are no obvious fuel economy differences to report.

That’s why the 1.5-litre TSI engine is now a realistic option for the T-Roc.
The Volkswagen heritage is very clearly obvious. You can feel it throughout every aspect of the car, with a Golf-like driving experience on a raised structure to give marginally better road visibility with all of the well-manner handling of the Volkswagen Golf range.

Out on the road, it is an easy drive. The car’s engine management system allows the engine to automatically shut down two of its four cylinders for fuel economy reasons, if not needed.
This adds to the thrifty performance and the beauty of it is that you don’t even notice the difference, other than a small message appearing on the dash.

The petrol engine performance means that on longer runs it cruises with ease.
While this engine revs higher than its diesel equivalent with judicious driving you can almost achieve the rated economy figure of 19km/litre (5.3/100km or 53.3mpg).

This means that on motorway drives you cruise at 120km/hr with the engine at 2500rpm, just marginally over the best economy sweet spot, without too much suffering in terms of fuel economy. 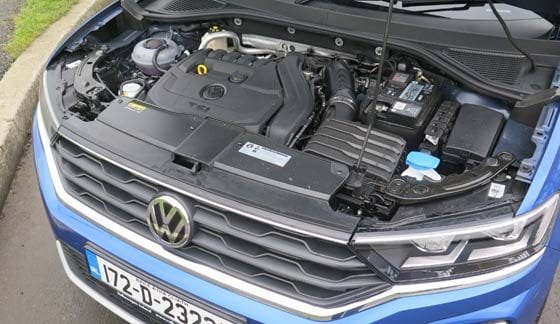 With the engine performance so good, it’s easy to get comfortable with the other features.
The dash layout is typically Volkswagen with a slightly more robust feel to it. The speedo layout and clarity, introduced in the Golf over a year ago, is very easy to use with lots of easy to set options, all electronically driven.

The central infotainment screen is very large and clear to use with finger touch control.
I found that I quickly got used to its features and setting up the Bluetooth phone connection was logical and easy.

The T-Roc is designed as a five seat car, and to be more compact that the Tiguan. Five adults might find it a squeeze.

All Volkswagen T-Roc models come with Volkswagen’s high-tech safety systems.
Entry prices start at €29,225 for the 1.5-litre versions, while the smaller 1.0-litre petrol engine version is even more competitive at €25,525.