Trust George to help serve up a delish dish

Now that Summer is here – well, just about – the George Foreman 10 Portion Grill & Griddle (€89.99) is perfect for a BBQ with friends.

There’s a four-portion grill and a six-portion griddle in one, meaning you can cook a number of portions at once. 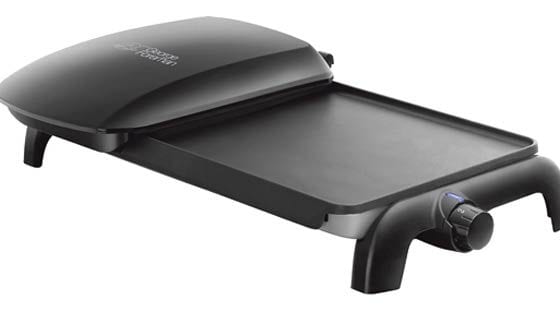 The grill and griddle even allow for healthier cooking, with grease channelled away from the food into a separate grease tray. (This also makes for easier cleaning up, too!)
To show you how to use the grill, take a look at this delectable Piri-Piri chicken recipe (right); it’s perfect for any time of year.

PREPARATION
Preheat the grill to maximum temperature. Char the chillies on the grill for 2-3 minutes. Set aside until they’re cool enough to handle, then roughly chop and put them in a saucepan with the garlic, salt, oregano, paprika, olive oil and vinegar.
Bring to a simmer and cook for 2-3 minutes. Allow the mixture to cool, then blend it to a puree.

Put the chicken breasts in a lidded container or sealable plastic bag. Add the piri-piri sauce, spreading it evenly over the chicken. Seal and marinate the chicken in the refrigerator for at least one hour.

Cook on the grill for 8-10 minutes until cooked through.
Serve, and enjoy – the chicken is particularly delicious with salad and potatoes, or rice.

Serial Bookie Robber Jailed for Four and a Half Years

Fingal man pleads for information about partner killed in India