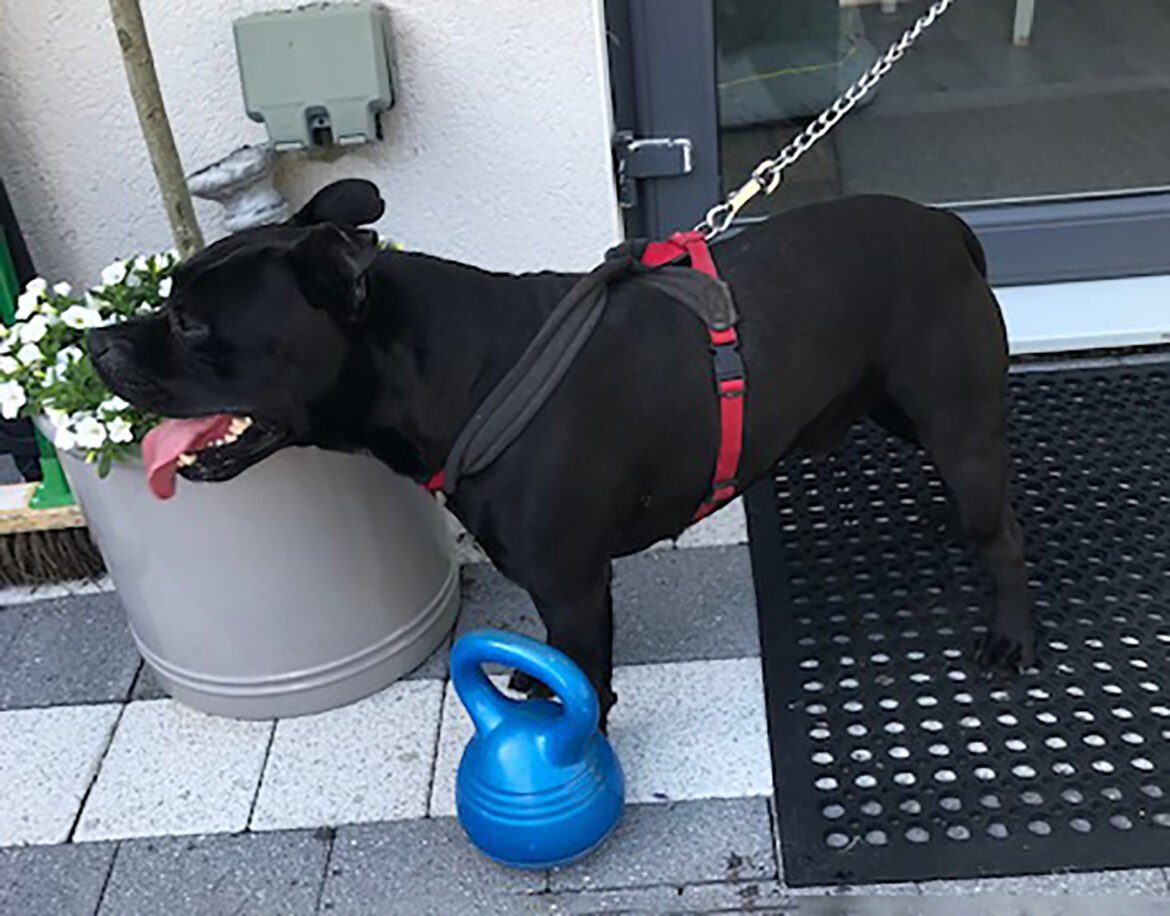 Meet ‘Staffie’, a Staffordshire bull terrier found tied to a tree in Kinsealy Lane, Malahide on Friday, July 16, at the start of the recent heat wave.

Wearing a good quality harness and lead but no name tag, it’s impossible to ascertain whether the male staffie was deliberately abandoned or had simply managed to evade his owner and run off. But he was found tied to a tree near the Malahide estate on a day that temperatures reached 19 °C (66 °F).

The pure-bred is now in the care of Lissenhall Veterinary Hospital, Swords. A spokesperson said: “The little Staffordshire was a tad confused when he was brought in to strange surroundings, a little out of sorts. While he was a little stressed and panting a bit, he was clearly a well-cared for dog.

“He is in great condition, and his weight for his age and size are right on the button, a good healthy little staffie.”

Another staff member who is looking after ‘Staffie’ in the boarding kennels confirmed the dog was not microchipped.

“He is a really well-bred dog, and used to the best of food. This little staffie was clearly well looked after and I feel was used to a family environment. He has a wonderful temperament but he is a little stressed in the confines of the boarding kennels.”

Despite advertising the dog on social media and spreading the word with connections in animal support care, no one has, as yet, come forward to claim the little chappie.

Estimated to be about two years old, Lissenhall will not be sending the dog to the pound and assured the Dublin Gazette that he will be cared for, until the owner/s come forward or a new home is found.

Staff members stated it was impossible to speculate as to how the Staffordshire appeared to be abandoned – was he being cared for by another person when a family went on holidays? Did he manage to get away on his owner and get lost?

Despite all the veterinary service’s appeals online, they are surprised that such a well-cared for – a pure bred Staffordshire – has not yet been claimed.

“This is where mircro-chipping is so important. If this dog had a chip in, we could have immediately identified his breeder or owner. Please get your dog – your precious family pet -micro-chipped!”

If you recognise this dog, please contact Lissenhall Veterinary Hospital on 01 890 0375. Proof of ownership will be expected.