Kia has refreshed the look inside and outside on the popular Rio car that was the only Kia ever to achieve the accolade of being Ireland’s Car of the Year. Michael Moroney reviews the latest Rio in petrol form, which is achieving growing market awareness around Dublin city and county.
The Kia brand is seen as one of the newcomers on the Irish car market, which makes it somewhat of a surprise that the latest generation Kia Rio is in fact it’s fourth.
For Kia the Rio is a very important car in Ireland as it is one of the brand’s best sellers.
The Rio upgrade adds more safety with style. The car is marketed as a large supermini with the previous generation model achieving the accolade of being the Irish Car of the Year, in its day.
Take a passing glance at the Rio and you’ll probably ask what’s new? The overall external dimensions might look the same when in fact it is marginally longer with an extended wheelbase and shorter overhangs at the rear. Combine these measurements with a lower stance on the road and you’ll discern a more modern look to the latest Rio.
It’s on the inside that you’ll notice the big changes if you are an existing Rio driver.
The cabin area has been completely changed with better layout of the controls to accommodate some of the new technology features included.
The dashboard lines are more horizontal than before with a cleaner look. There is a centre screen mounted in the middle of the dashboard that’s more angled for the driver and comes with high resolution features.
The overall interior look is more modern and the heater controls are more compact and fitted below this. You’ll instantly know that you’re driving an updated and more modern car.
Petrol engines are making gradual comeback in this segment of the car market and that’s why my test drive of the new Rio with its entry level 1.25 litre petrol engine, proved interesting to drive.
This engine is rated at 85bhp and 122Nm at a relatively high engine speed.
Kia has a new smaller three-cylinder turbo-petrol engine on the way for the Rio that packs more power and torque and at lower revs. That’s an option that merits serious thought for the future, but it’s not yet available here in Ireland.
Out on the road, the petrol powered Rio performs smoothly and quietly. The five-speed gearbox is neither exciting nor demanding, giving easy driving pleasure, especially for city driving.
That makes this an easy car to drive, with modest rated economy figures of 21m/litre (4.8/100km or 59mpg). Pushing the car into the higher engine rev zone will give obvious fuel economy penalties and that was noticeable with motorway driving as the five-speed gearbox edged the car into the higher fuel usage zone. That’s why for me the notion of careful steady driving can show results in a petrol car such as the Kia Rio.
For most Irish Rio buyers the 1.4 litre turbo-diesel engine has been the most popular and for good reason.
The economy difference is significant giving a 25% advantage to the diesel version for a 10% price difference. I expect that difference will keep more Rio drivers in diesel power for the near future, at least, until the arrival of the new turbo-petrol version with more power and claims of impressive economy figures.
Kia claims that this new Rio is one of the safest cars in its class because of the new package of Kia’s Advanced Driver Assistance Systems (ADAS). These come in the higher specification models and along with six airbags and a lighter but stronger steel structure, ensured a 5 star Euro NCAP rating for the car.
Given the new upgrade along with the 7 year warranty, Kia buyers are sure to stick with For those looking for a well-equipped car with good space and a host of new modern features, the Kia offer remains solid and consider the option of the new generation turbo the brand value and now the higher specification petrol models on the way. 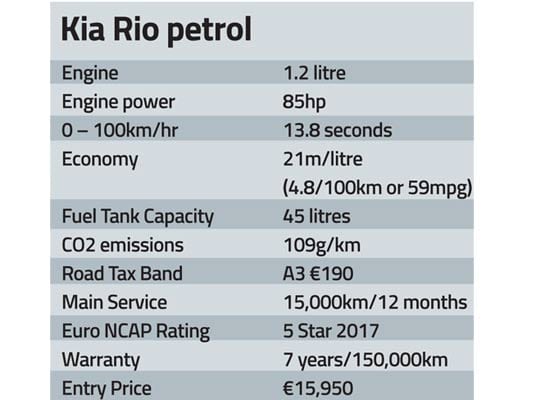 Have an ice time at Funderland

A dining delight in Temple Bar

19/05/2016
We use cookies to ensure that we give you the best experience on our website. If you continue to use this site we will assume that you are happy with it.Ok