In a packed SUV market, the new Peugeot 3008 stands out from the crowd with impressive new styling inside and out and a driving ability that set to convert many SUV drivers, according to Michael Moroney.

The new Peugeot 3008 makes a strong first impression both inside and out. The design team have excelled in producing a new SUV that has bridged the gap between modern and practical with a new car that’s sure to boost Peugeot sales dramatically in Ireland.

The accolades for the new 3008 have come before it. This SUV was named the 2017 Car of the Year by a judging panel, comprising 58 European journalists. Irish motoring journalists also selected the 3008 as their car of choice for 2018 giving the 3008 a significant head start in the market.

I took the Peugeot 3008 for a recent drive, to get more acquainted with its abilities. Peugeot provided me with the range topping GT version that’s probably outside the normal expectations of the car. The specification was high, just to show how well you dress up the car to add a further touch of luxury to its already impressive credentials.

Peugeot offers the 3008 in four trim levels, Access, Allure, GT Line or GT. They claim that over 85% of orders for the car are from the second level, Allure trim upwards as Peugeot aims to lift the image of the brand to a higher and more prestigious level. The look of the new 3008 alone that a significant job in lighting the brand image.
Out on the road the 3008 simply stands out. I noted something unusual about other 3008 drivers. 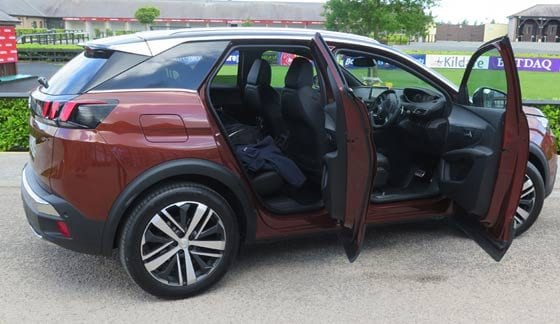 Those few other 3008 drivers that crossed my path actually gave me a spontaneous ‘thumbs up’ as if I had joined their special club, such was their pride in owning a new 3008.
The new Peugeot joins a growing C-SUV segment of the car market where is lots of impressive and longer standing competition. Nissan’s Qashqai is the segment market leader so many buyers will be benchmarking the new against it and the fast growing Renault Kadjar.

The 3008 has performance measures to match with the benefit of new Peugeot styling to give the car a stand-out look.
Peugeot’s petrol engine option is another plus at the entry end of the market, while its diesel powered 1.6-litre entry model is also very price competitive.

I drove the 3008 over a 980km test drive and found that my real world driving economy with the car’s six-speed automatic gearbox was about 30% off the rated figure, that’s a level of economy difference that I’ve come to expect across almost all cars that I drive.

There is a Sport drive option in the automatic gearbox that’s impressive to respond. For most of my driving I took the economy mode, operated through a very modern looking control lever. Peugeot completes the package with an electric handbrake and start/stop driving technology.

On the inside you’ll simply have to be impressed with the modern layout and design. The new-generation i-Cockpit gives the car a distinctive interior style and feel. I liked the compact Formula car-type steering wheel, the large 12.3” display and central touch screen console which is controlled in an almost mechanical way by what Peugeot call are ergonomic piano keys. 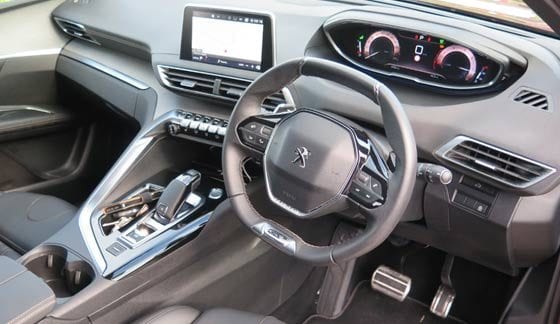 The steering wheel design allows good visibility of the low electronic dials behind the wheel and it’s a design and feel that I quickly got used to.
The central area between the driver and front passenger is large and provides lots of hidden storage space.

There is great storage space throughout the car including the boot, which even with the spare wheel fitted, is amongst the more spacious that either the Qashqai or the Ford Kuga at 520 litres, before the seats are folded down.

The 3008 is a safe and easy car to drive and comes with a range of advanced driver safety features as standard across the range. 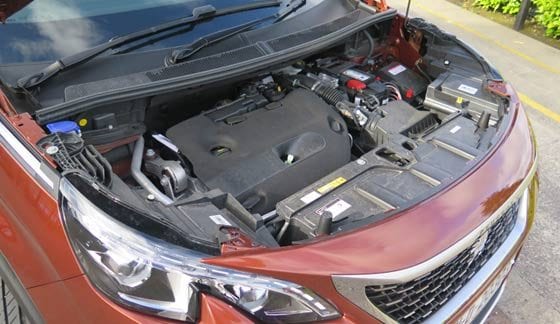 Entry prices are competitive starting at €26,595 for the petrol versions while diesel powered versions come with a starting price of €27,115 for the 1.6 litre engines.
That’s a competitive offer relative to the market leaders for a new car design that’s impressively distinctive.

Get close to the new Peugeot 3008 and the design is such a departure from any car that Peugeot has produced before that you will struggle not to be wooed by it. Drive it and you will be convinced.

Getting to Canada just got a whole lot easier

Ballyogan locals urged to have say on local area plan

A dreamlike journey with a unique vision

Dublin Made Easy: The National Library of...

Stay focused on finances for life

14/02/2013
We use cookies to ensure that we give you the best experience on our website. If you continue to use this site we will assume that you are happy with it.Ok