Peugeot’s new 5008 car will make a strong impression on the Dublin car market for a combination of its distinctive styling, flexible seating, modern dash design and total package offer. Michael MoroneY took a New Year drive in the new Peugeot and he’s well impressed with it.

Peugeot’s new 5008 car makes an impressive statement for the French brand in terms of styling and the overall package on offer. This new car for 2018 brings Peugeot into a growing market segment of seven seat SUV’s, with a unique design style that stands out from the crowd in a modern and distinctive way. 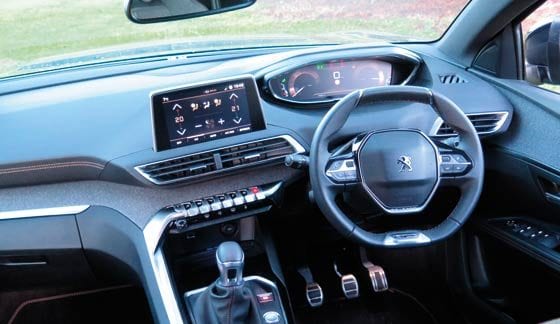 This shows the new Peugeot iCorkpit dash design that’s especially modern in terms of style with plenty of functionality and a range of easy to use display options.

SUV growth in the Dublin car market has been phenomenal; the new Peugeot 5008 is set to boost that even further. In its previous form, Peugeot’s 5008 was a top selling MPV, now it has morphed into a large seven seat SUV, almost without a hint of warning, to make it a real family driving choice for 2018.

What’s noticeably different about the new 5008 is that it now comes with the new Peugeot iCockpit and digital instrumentation across the range. The 5008 range prices start from €29,345 plus delivery related charges for the Access 1.2 130bhp PureTech petrol version, while the entry diesel versions cost an additional €520.

Peugeot claims that the new 5008 is lower and more spacious, yet less bulky than competitors. And while it is a full seven seat car it retains the same height as before at 1.64m while the third row passengers get an extra 21mm of head height.
This new SUV design model is longer than the previous 5008 and Peugeot claims that this delivers additional knee room for the second row passengers who also have the benefit of individual sliding seats. The extra length means that the camera reversing kit is useful option for the 5008.

The second row of seats are matching and each separate and can be folded and tilted, while the two third row of seats can be easily folded or removed. All three seats in the second have three-point Iso-fix child seat anchor points.

The seating arrangement gives the car great flexibility. In the five seat mode, the boot space is impressively huge, while the boot itself is a shade heavy and could benefit from an auto opening system that’s available from other brands. There’s a useful space saver spare wheel tucked externally under the boot floor.

I was driving the 1.6 litre turbo-diesel version that’s rated at 120bhp and comes packed with the extra features that come with the higher specification GT-Line range.
The GT-Line specification adds almost €10,000 to the list price of the car compared with the entry level Access specification model.

There is a lot of extra kit coming with the GT-Line and GT models, while the slightly lower specification Allure models comes with a high level specification at a keener price.
Peugeot has a wide specification option listing for the new 5008 model, across five trim levels which include Access, Active, Allure, GT Line and GT versions, and a range of both petrol and diesel engines. So take time to look at the choices and give yourself the potential to get the best value offer.

The extra third Iso-Fix seat in the middle row is also a useful safety bonus for family owners. There is sufficient width to squeeze three small people in safety and comfort.
Peugeot has re-invented its car range topped now by this impressive 5008 that combines people carrier features in a model SUV styling. 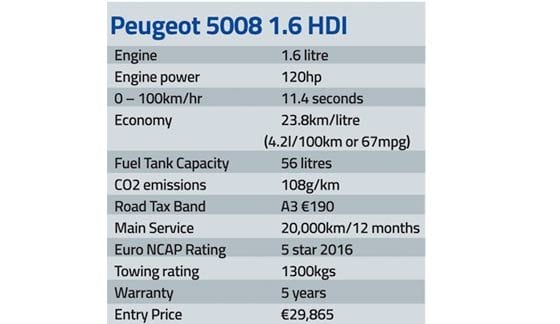 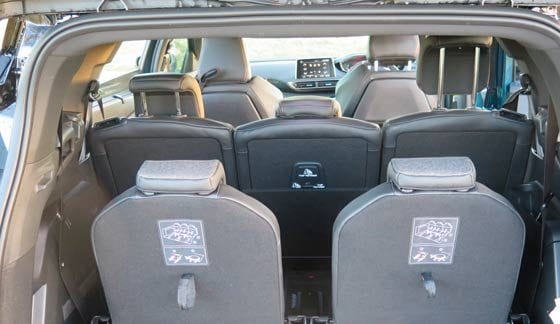 One of the more impressive features of the new Peugeot 5008 is the ease with which you can convert the car from five to seven seat configuration and back again.

While there is some competition in this big market segment, few cars have the distinctive styling of the Peugeot 5008 in a car that’s packed with features.
This is one 2018 car that has to be driven and experienced to appreciate its styling, flexibility and value running costs.

Waves of anger as flood wall to be lowered

Be bold and beautiful

Trainer Tips: Rely on a trainer to...

18/10/2018
We use cookies to ensure that we give you the best experience on our website. If you continue to use this site we will assume that you are happy with it.Ok