Dubliner Paul Kielty has packed quite a lot in to his eventful life. Having moved to the UK in 1997 to study in Wolverhampton, Paul has had an incredibly varied career.

“I’ve bounced around a bit,” he tells Dublin Gazette. “I’ve played a bit of guitar here and there as well. We had an exhibition recently that went really well, as well, and I’ve been teaching kids with disabilities digital art.”

Later this month, Paul – who hails from Crumlin – will launch his first book of cartoons under the moniker of Kieltyascharged.

Matt Hazard: Return of the Naïve is a collection of cartoons starring Matt Hazard, a man living permanently in a hazard suit whose mundane life is punctured by the absurd situations he finds himself in.

The delightfully silly cartoons are short, to the point and very funny.

“It was that kind of thinking to take something extraordinary and try to make it ordinary that everybody could identify with,” says Paul. 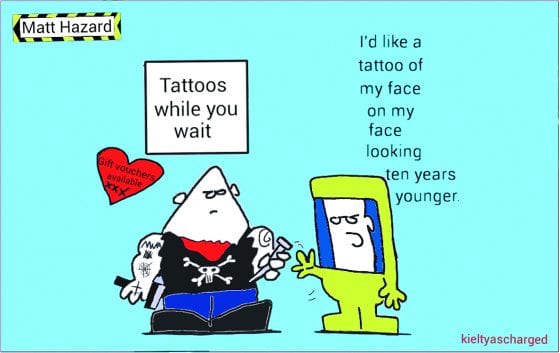 “A lot of cartoons that I grew up with, I enjoyed looking at but I didn’t really get the jokes.
“I wanted to go the opposite way. I wanted to make something that was really simple and make the punchline very obvious and try to fit it on one panel as opposed to having a few.

“Somebody said to me once it was like the Samuel Beckett of cartooning, which I quite like.”

Matt Hazard has struck a chord with those who have seen him, with renowned cult cartoonist Hunt Emerson a confirmed fan.

“Matt Hazard comes from way out of left field, and bounces off the walls on his way in, and I laughed out loud frequently,” Emerson said of the book, before warning there are puns, which he loves.

We Hazard a guess that many other readers will enjoy them too.

Matt Hazard: Return of the Naïve will launch on Thursday, September 27. Advance copies are available now for £8.99 (Approx. €10) from http://fairacrepress.co.uk/shop/matt-hazard-return-of-the-naive/

Dog of the Week: Meet Badger

Saying ‘I Do’ To Our Wedding Supplement

Why An Allotment Is So Much More Than...

Life only begins when we step out of...

Get Crafty and Relax with Aldi this Autumn