Mazda2 packs in the features

The supermini segment of the Dublin car market is second only in importance to that of the growing SUV market and that’s where cars such as the Mazda2 compete against some of the dominant players. Mazda offers great goods in a small package as Michael Moroney found on his test drive of the Japanese brand’s entry model.

Mazda’s supermini, the Mazda2 all too often gets overshadowed by the impressive features of other cars in the Mazda range.
It’s one of the hidden gems of the Japanese brand and one gets the impression that its value is understated in an ever growing small car market.

For many city drivers, cars like the Mazda2 have strong appeal. They deliver compact dimensions, good economy, ease of driving and now some impressive features. 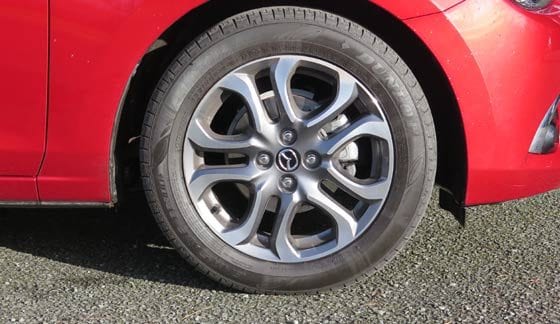 At a time when the small car market is drifting towards compact SUV’s the supermini’s have a challenge to maintain their valuable place for family motoring. Mazda’s smallest model has a long and strong heritage in the segment, and my recent test drive showed just how much appeal there is to the car.

Mazda now offers two engine choices for the Mazda2, both are 1.5 litre in capacity so the choice is down to petrol or diesel.
The diesel engine is the more powerful of the two. I took the petrol option for my recent test drive, where the smoothness of the petrol engine power was comforting.

This is one of the larger petrol engine sizes available in any supermini while Mazda has tamed its performance a little, with economy in mind.
The result is a very capable and comfortable car to drive, especially for city driving, where it excels. 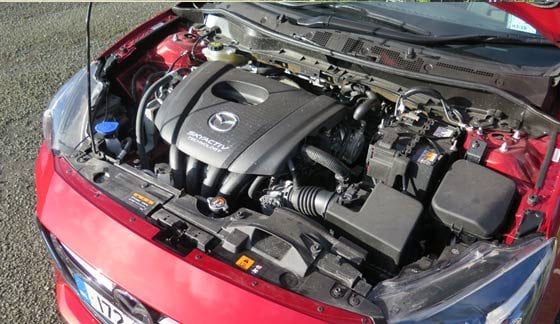 The engine power is rated at 90bhp, which is modest, while the engine torque is also modest for an engine of this size. Out on the road, the five speed gearbox is smooth and easy to use, but you quickly drift above the 2000rpm mark with even modest enthusiasm.

That brought me into the fuel burning zone where economy suffers and where the rated economy figure of 22km/litre (4.51/100km or 63mpg) becomes difficult to maintain.

Judicious driving will reveal good economy and that car was pleasantly thrifty around town.
Many of the other supermini’s on the market are being powered by small three-cylinder petrol engines and they provide new competition for the Mazda2.

Mazda’s four-cylinder 1.5 litre petrol engine is so much smoother to drive and the car provides no challenges, just ease of operation in a compact size.

Mazda rightly makes a lot of noise about its manufacturing technology using what are called Skyactiv engines and modern steel in the structure of the car. Among the benefits of these technology features are stronger and lighter cars.

Relative to the competition in the shape of the Ford Fiesta, Volkswagen Polo or new Nissan Micra, this Mazda2 is a lighter car, even though it’s longer. It also has the longest wheelbase, which is one of the factors that helps to deliver a very comfortable drive.

The Mazda2 comes with the Mazda i-Activsense safety system which uses cameras and sensors to monitor surrounds and protect the driver and car occupants.
It comes with Mazda’s G-Vectoring Control system that claims to vary engine torque in response to the way that you steer the car.

The seating is compact and comfortable with good adjustment up front. While the car is rated as a five-seat supermini, the centre rear passenger gets the poorest deal in terms of space.
There are two iso-fix units in the rear and the usual child locking facilities. 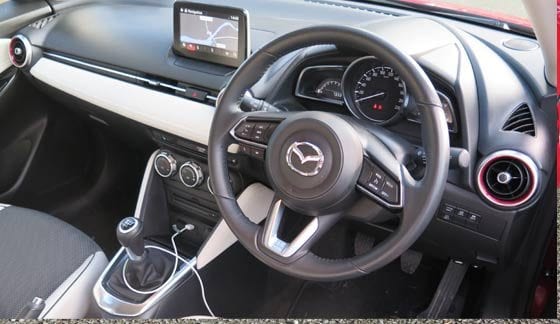 The Mazda2 is a car that’s easy to get comfortable with. The package of the car’s features is as neat as the car looks itself, and depending on the specification chosen you can get it all. 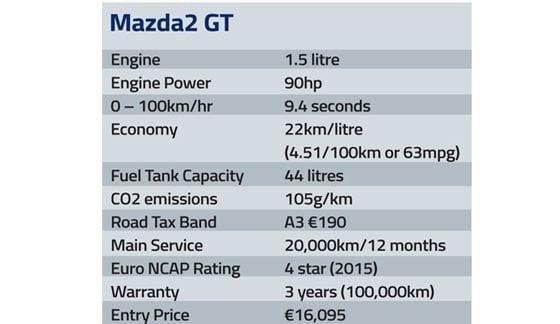 The entry level pricing at €16,095 looks attractive and is well specified, while jumping to the top spec GT version gives you all you need in a compact city car that’s well packaged.

A toast to craft brews!

Dublin made easy: the best bars for...

Take to the waters of the world...

31/07/2014
We use cookies to ensure that we give you the best experience on our website. If you continue to use this site we will assume that you are happy with it.Ok