What are your most memorable GAA moments?
EirGrid, the state-owned company that manages and operates Ireland’s national grid launched the “EirGrid Moments in Time” campaign as part of its timing partnership with the GAA.
The campaign will culminate with a club in each province winning a digital clock and scoreboard. To launch the initiative EirGrid has conducted research amongst 300 GAA supporters to establish some of their best and most memorable GAA moments.
92% of GAA fans said that their first time in Croke Park stood out as a childhood memory, with 57% stating it was their father who brought them. Dads remain top of the pops when it comes to attending GAA matches as a quarter (25%) of people surveyed said their favourite person to go to a match with was their Dad.
GAA fans who want to take part in the EirGrid Moments in Time competition can enter by posting a picture highlighting a special GAA moment from the championship on their Twitter or Instagram using #EirGridGAA & tagging the specific provincial board. We want to see them all.
For further information please see: www.EirGridgroup.com.

Tackling mental health issues with Charity Football Tournament
Ireland’s top musicians and footballers are joining forces to raise funds for young people’s mental health.
The Coronas and Picture This will compete in a star-studded football tournament that includes a team of Irish celebrities, a team of former League of Ireland players, Ireland’s Homeless Street League team and a team of Boh legends.
Former Celtic star Paul Byrne along with Richie and Dessie Baker will be showing they still have it when they take on TV presenter Brian Ormond and FM104’s Keith Ward with more names to be announced.
The eight-team tournament takes place at the National Basketball Arena in Tallaght on Sunday, August 27 with kick-off at 10am.
Tickets are just €5 with all money raised going to JIGSAW.
Tickets can be bought online at www.facebook.com/charity.vinny or on the door.”

Survivors Guide Comedy Show
for Visitors to Dublin
Ireland A Survivor’s Guide, the fantastic comedy sketch show for visitors to Dublin returns to the International Bar until August 31, Tues to Fri at 1pm.
This 5-star Trip Advisor-rated comedy show is brilliant lunchtime entertainment.
Their sketches are fast physical and weird. There’s audience interaction, music and some crazy props. The show is constantly changing and evolving so even if you’ve been once, come back a second time to see what’s new.
Booking at www.irelandasurvivorsguide.com. 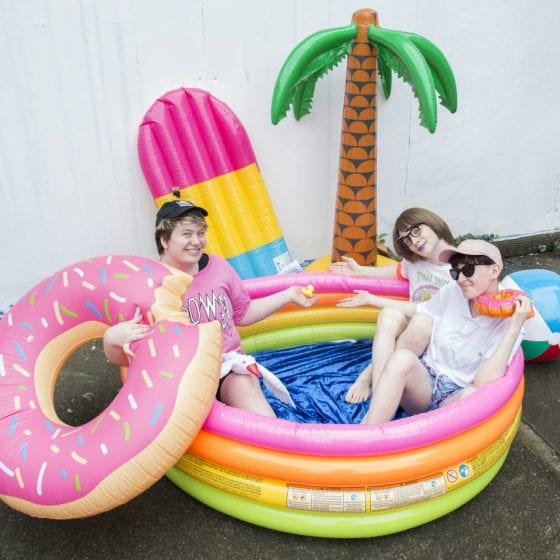 Trans Live Art Salon is creating an inflatable oasis in Dublin
A Fully Automated Luxury Gender Oasis is coming to Dublin as part of this year’s Fringe Festival.
The Trans Live Art Salon is curating an inclusive art space in the Temple Bar Gallery and Studios with performances, exhibitions, and queer skill-sharing workshops from September 15 to 19.
What is the Fully Automated Luxury Gender Oasis you ask? Well it’s a “magical, inflatable oasis” with a curated programme of workshops, games, art, talks, and performance by queer, trans and gender non-conforming artists.
Artists include Elll, Squinky, Aitch Giles, Tammy Duplantis, Gabriela AveiroOjeda and more.
The event is be free and accessible for all, including trans, neurodivergent, and disabled people.
Organisers, the Trans Live Art Salon are a collective whose aim is to carve a space for trans and gender nonconforming people to feel safe, work together as a community, and learn from each other.
Tickets for the event are free, find out more at fringefest.com.

‘I was used as a human guinea pig’