Think before getting a pooch for Christmas

You may have noticed large rather mysterious paw prints dotted around the streets of Dublin last week with the hashtag #PawsForThought.

Dogs Trust revealed it was behind the paw prints by putting their stamp under some of the oversized paw prints. 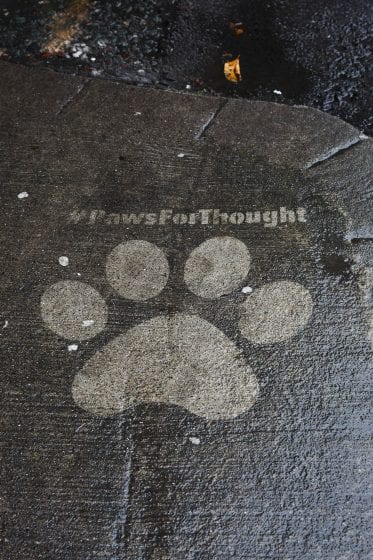 Large paw prints were dotted around the streets of dublin in a clean graffiti stunt by Dog Trust’s called #PawsForThought to remind people of their Christmas message that ÔA Dog is for life, not just for Christmas¨

The clever stunt was created using clean graffiti to represent the owners that wash their hands of the responsibility and commitment that comes with owning a dog.
The charity revealed that 756 people contacted Dogs Trust within the first three months after Christmas last year to relinquish their dogs, compared to 479 in the same period the previous year.

This equates to an alarming 58% increase in the number of owners looking to surrender their dogs. The charity recorded that the most common reason for someone wanting to give up their dog was that they didn’t have enough time anymore.

An example of this is Bella (featured image), who came to Dogs Trust as a young pup and the charity suspect that she was given to someone as a Christmas present.

Bella arrived with an eye infection, which she had been suffering with for a long time. However tragically, in Bella’s case, her right eye was left untreated for so long that it had swollen completely shut and had to be removed. If she had been brought to a vet at an earlier stage, this could have been prevented.

Luckily, she ended up in Dogs Trust, where she was nursed back to health, she was given lots of love and they found her, her forever home. But for some dogs there isn’t such a happy ending.

Unfortunately, with over 1,000 abandoned dogs per year coming through the charity’s doors, and thousands more the charity cannot possibly take in, people are still taking on the responsibility of dog ownership without enough consideration of what it really entails.
The charity is urging Dubliners to give the gift of life this Christmas by Sponsoring a Dog instead.

“You can save lives and give abandoned dogs the second chance that they deserve.”
To help spread their message this Christmas, Dogs Trust want people to #PawsForThought by posting their Paws or Pause Pose on social media, with pictures of them or their furry friends pausing for thought!

Speaking about the campaign, executive director, Dogs Trust, Suzie Carley said: “We hope that by spreading the message that ‘a dog is for life, not just for Christmas,’, we will encourage people to wait and consider adding a dog to their family in the New Year instead, when the festivities die down.”

Protect Your Skin This Summer and Beyond with...

Get Your Skin Ready For Summer With Aldi