There is growing interest in the ownership of electric cars in Ireland and specifically in the Dublin region, as range anxiety fades with improved battery performance.

Equally importantly, was the news in the recent Budget that the 0% Benefit-in-Kind (BIK) incentive as a one-year trial, will now be available for a minimum of three years. This has become a real game changer when it comes to company car ownership of electric cars.

Despite fears in the motor industry, the Minister for Finance Paschal Donohoe in his budget opted not to raise the price of diesel, against the background where there was a lot of speculation that he would seek to close the price gap with petrol. The only motor related measure announced in the Budget was the introduction of a new incentive for company-owned electric vehicles.

The Government estimate the cost of the BIK incentive at just €500,000, but they might be surprised as the motor industry, across many brands with electric car options, is seeing more interest in electric and hybrid cars as a result of this tax incentive scheme.

Minister Donohoe said that he was taking this approach to motoring taxes in order to allow scope for a comprehensive review of BIK on motor vehicles in time for the next budget.

This BIK extension will now make electric vehicles a far more attractive option for many commuting motorists, with possible savings of up to €10,000 a year for low-mileage company car users. Car leasing firms, which usually buy vehicles in a three-year cycle, will now be able to plan depreciation costs of electric cars in a more viable way over a number of years.

This will mean that the electric car option will come into focus for many company car drivers and fleet managers who look for ways of reducing the costs of their daily commute into the Dublin region.

The lower BIK rate comes on top of the current vehicle registration tax (VRT) tax relief to a maximum of €5,000 and the SEAI grant of up to €5,000 which is already in place.

Nissan has been a leader in the supply of electric cars in Ireland. The company reports that based on 2018 pre-sales and customer enquiries in their showrooms they are already starting to see some very interesting shifts in customer preferences with regard to drive-train.

“Pre-sales activity tells us what next year’s trends will look like and we are seeing great interest in electric car ownership in Ireland,” according to James McCarthy, managing director at Nissan Ireland.

What has happened in the electric car market for this year does not reflect the likely changes expected in 2018. 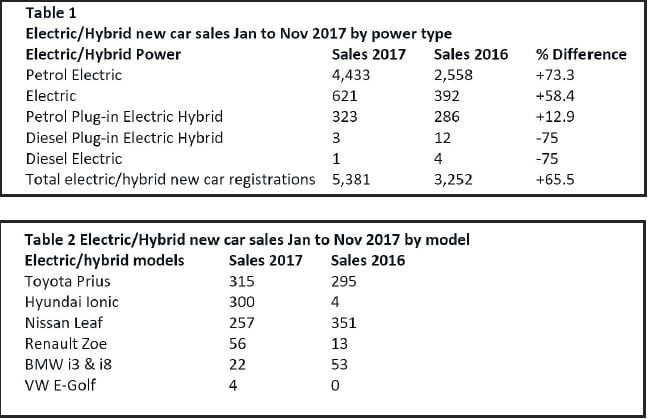 The big increase has come in hybrid petrol cars, where Toyota has been promoting its hybrid range with price and car exchange incentives.

Sales of the clearly identifiable Toyota Prius are up marginally, but the big growth has come in sales of the hybrid versions of the Yaris, Auris and RAV4, all of which have significant growth in 2017.

Sales of pure electric cars also increased in 2017. The registration figures produced by the Society of the Irish Motor Industry (SIMI), show electric car sales growth of 58% year on year. 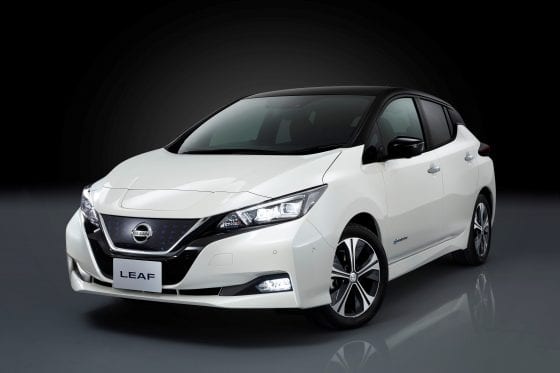 Overall, there are now close to 1,600 Leaf pure electric cars on Irish roads.

This growth sales prediction for 2018 is because Nissan’s new Leaf comes with a more powerful 40kWh battery as standard that now claims a maximum 378 kilometres range from a single charge.

The Leaf using the same three-pin plug takes up to a maximum of 16 hours from flat because of its higher capacity. If you use a more powerful EV home charger (6kWh) the new Leaf will take eight hours to charge fully from flat. A 40-minute charge at a public quick charger (50kWh) can deliver 80% capacity, according to Nissan.

Even though uptake has been relatively slow in Ireland, the Leaf is the world’s best-selling EV with close to 300,000 sales in 49 markets; there are approximately 30,000 Leafs in Norway alone Europe’s leading electric car market.

Nissan claims that the consumer interest in the new Leaf is growing exponentially and Nissan Ireland expects a 200% increase in LEAF based on pre-sales interest compared with sales in 2017.

The Hyundai Ioniq was also a strong seller in electric and hybrid drive during 2017, putting marginally behind the Toyota Prius. 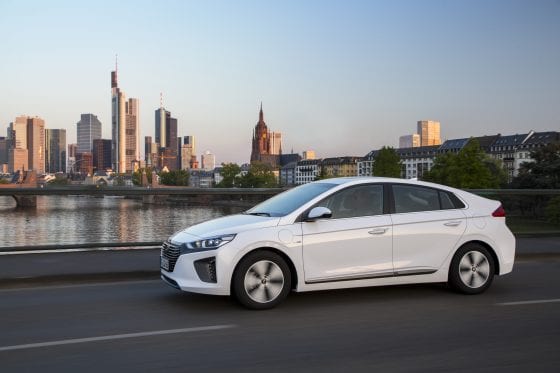 The Renault Zoe, BMW i3 and i8, while the impressive Volkswagen e-Golf made an initial impact but expect to see more in 2018.

The recent Carzone Motoring Report also confirmed a significant trend toward hybrid and electric cars. The survey indicated an increasing demand for electric cars is increasing in Ireland. It showed that 16% of those surveyed said they would consider buying an electric car in the near future.

And the number of searches for electric cars on the Carzone website has increased by over 180% year-on-year in 2017.

Being kind to the environment was the number one reason why people would switch to an electric car but a lack of available charging points was the key factor in not making the switch. 82% say they do not have access to a charging point at their workplace and for rural dwellers availability of a charging point is an issue.
Just 30% of those living rurally have a charging station less than 5km away.

‘This Christmas will be very much a...

20/11/2014
We use cookies to ensure that we give you the best experience on our website. If you continue to use this site we will assume that you are happy with it.Ok