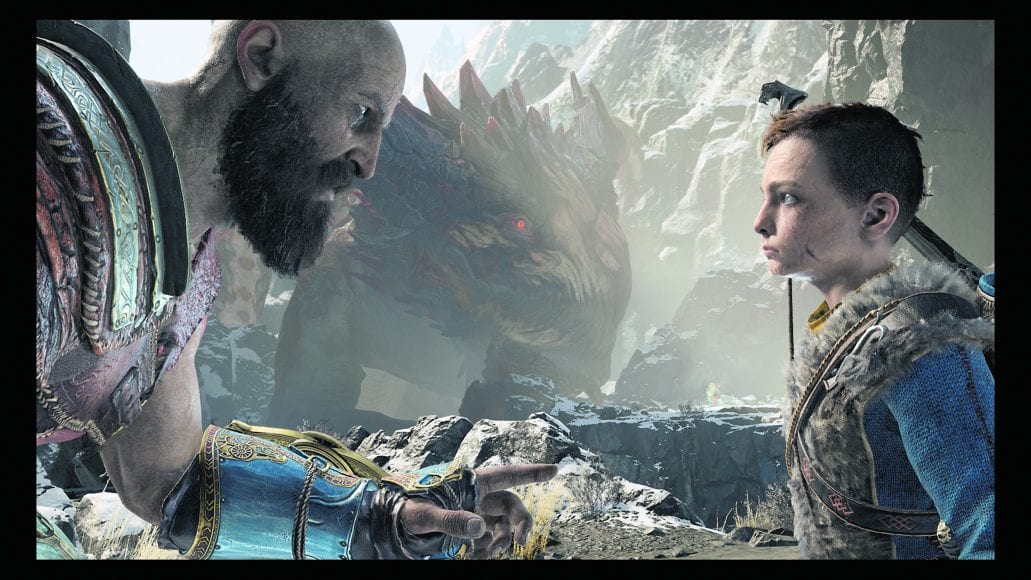 I don’t review many games here any more (despite still being a hardcore, old-skool – or just old – gamer myself), but it’s impossible for me to skip past one of the biggest games of the year; the just released God of War (Cert 18; c. €70).

After all, the PS4 exclusive is not just a spectacular tour de force for the console and contemporary gaming tech, but also shows the medium’s maturity to fine effect, expertly weaving in some unusually emotive narratives that’ll effortlessly resonate with anyone with experience of young children.

Most gamers, particularly those past their twenties and thirties, will come away thinking about their own kids, or their nephews, or nieces and their own relationships and roles in raising them.

That’s not a bad strand to focus on when considering a game that’s essentially about a very, very angry guy who goes around smashing things and fighting monsters, but one that also subtly and overtly hammers home the importance of familial ties throughout, too.

Although a long-running, critically acclaimed PlayStation series, the simply titled God of War acts largely as a cold reboot for the franchise, finding disgraced god Kratos – a Spartan by birth – now living in exile deep in the heart of Norse mythology after his many pantheistic run-ins with Greek gods.

Now with a troubled young son, Atreus (brilliantly realised by Sunny Suljic), Kratos (Christopher Judge, sounding like half man, half mountain himself) sets off to honour his late wife’s wish and scatter her ashes together from the highest peak in the realm – but the Norse Gods don’t take too kindly to an interloper in their midst, and especially when it’s the notorious slayer of their Greek brethren …

A standard enough literary focus on ‘the journey, not the destination’ comes into play here – pun intended – throughout the pair’s long, long journey across a surprisingly deep game that offers a hell of a lot of content.

While there’s a literal journey driving the game along as the hopelessly mismatched pair (the gruff, sullen, insensitive god and his obedient but unhappy young son) turn into journeymen together as they criss-cross the Norse realms, it’s the emotional journey of the two chief protagonists that lingers in the mind over the course of their lengthy adventure together, and beyond it.

From the best, most naturalistic presentation of a believable child character in gaming yet – Atreus’s quick wit, even quicker insults, innocent questions and flashes of emotion will constantly strike a chord with anyone with a son or young nephew – to Kratos’s slow, slow realisation that parenting isn’t just about being a cold, gruff authority figure, it’s the pair’s constant interaction and uneasy reliance on each other which engages even more than the visuals.

Still, what visuals. The gods themselves would approve, as God of War boasts some pretty jaw-dropping graphics in certain parts, with some absolutely incredible environmental design in many areas, alongside some blisteringly fast, spectacular particle and lighting effects in a very stable game.

“Wow,” as a seasoned fellow gamer simply put it when I showed him just a little of the game, and that’s without accounting for some of its many overwhelming setpieces. Wow indeed.

Still, very flashy design and stellar graphics aside – accompanied with a great score by busy composer Bear McCreary (of Battlestar Galactica, and The Walking Dead fame) that channels an interesting Lord of the Rings-meets-Gladiator vibe – God of War’s beating heart is the brilliantly realised father and son relationship driving it along.

While the game looks like it’s just about driving the pointy end of a big magic axe into a variety of beasts and monsters – and it’s very much this, too – it’s the game’s subtle reinforcement of the bonds of family that tie most of us together, even unwillingly at times, that makes a much deeper impact than all of the game’s violent delights.

To be as blunt as Kratos himself, you’ll Norse find a better game than this out there at the moment. Highly recommended. 10/10

Bringing a true taste of Asia to Dubliners