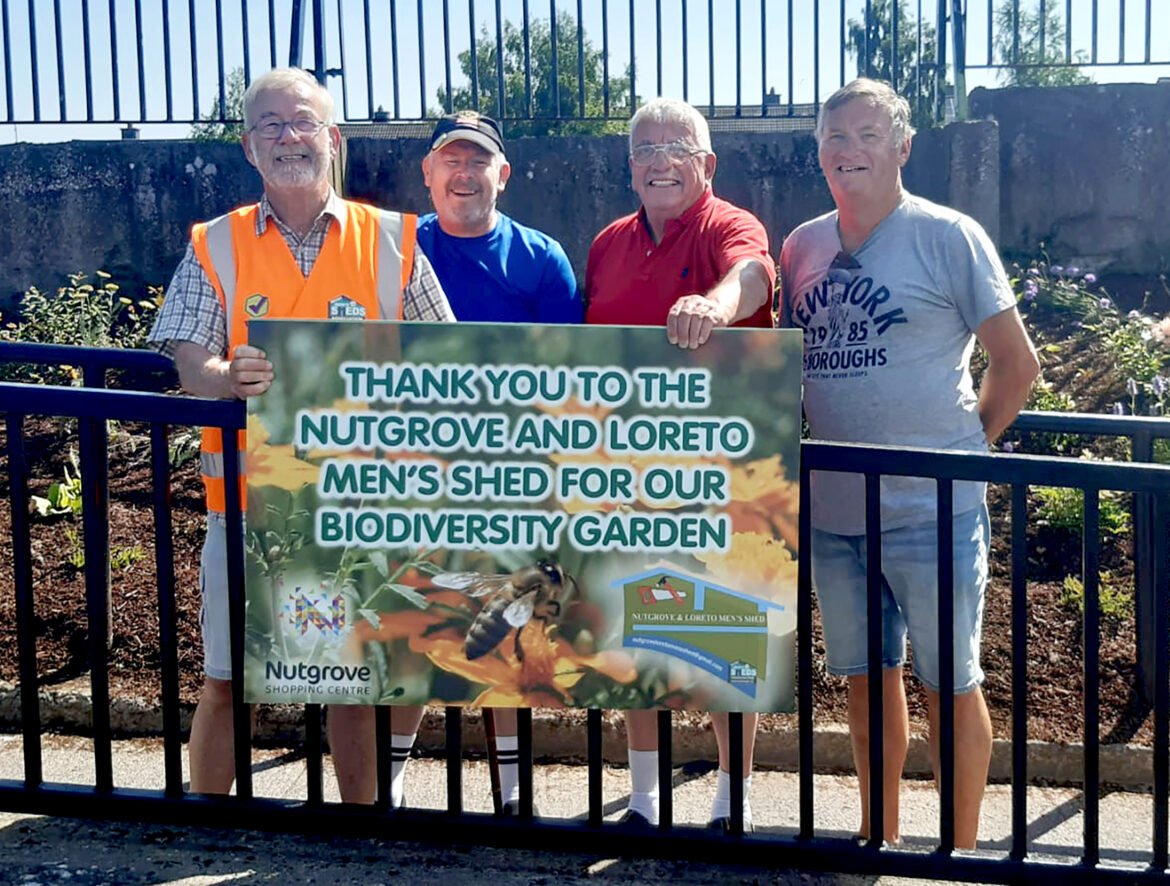 Loreto men’s shed and Nutgrove Shopping Centre joined forces last week to plant a biodiversity garden in the grounds of the shopping centre, in an effort to brighten up the community and to encourage bees to pollinate and thrive in the local area.

In the interest of giving back to the community, Nutgrove Shopping Centre has announced its  sponsorship of a new community boules pitch in its neighbouring Loreto Park, in addition to new polo shirts for the ten members of the men’s shed who began playing in 2020 as a solution to pandemic restrictions.

Mr Stocks continued: “Nutgrove Shopping Centre has again linked up with the Men’s Shed and Dun Laoghaire Rathdown County Council to provide a boules court in Loreto Park. The boules court will provide a space for the community to come together, meet, chat, laugh and have fun in a safe open-air environment.”

John Cahill, organiser of the Loreto men’s shed, told the Dublin Gazette that playing boules proved “a great idea to be able to keep mixing outdoors and to keep the shed going”.

“Although the pitch is being established through the men’s shed, it will be a community pitch for us all to play on and enjoy and we might even consider putting on some friendly tournaments in the future, as we improve”, he added.

The Loreto men’s shed, which was relaunched by Mr Cahill in 2018, welcomes men of all ages and backgrounds to meet weekly on Tuesdays and get involved in everything from gardening, composting, woodwork and now boules. Mr Cahill also stated that members can look forward to availing of a new workshop, received through Dun Laoghaire Rathdown County Council, once they are permitted to do so in accordance with government guidelines.

Mr Cahill highlighted the importance of the shed now more than ever, in the aftermath of lockdowns and various pandemic-related restrictions: “Ultimately, what the shed is all about is social inclusion to get men out of the house and to improve their lives. I have men ringing me up every week asking what we’re going to be doing and learning, it’s a wonderful community.

“Not only are they getting a great sense of achievement from learning new skills, whether that’s making planting boxes or composting, but they’re also contributing to bettering the surrounding area. These are also abilities that we can pass on, I know I love gardening with my grandchildren and seeing their interest and excitement as they watched something they planted from seed grow and end up on their plates.”

Ireland’s men’s shed movement began in 2009, with the first shed being based in Tipperary. Since then, the interest has grown considerably and there are now over 400 sheds registered with the Irish Men’s Sheds Association, with an estimated12,000 men visiting a shed every week, pre-pandemic.

The Irish Men’s Sheds Association was officially established in 2011 and, in 2013, President Michael D. Higgins became its patron. The association has received governmental and European recognition for their contribution to the Irish community, including the European Citizen’s Award.

Hurling: Rebels stand in way of Dublin’s path to semi clash with Treaty