Koleos a freshing take on the SUV

Renault has given its rather quirky looking Koleos a full makeover, to give it stronger position in the mid to larger SUV market. This new Koleos has new status to justify the change in design and that makes it a new competitor for its related Nissan X-Trail, as Michael Moroney found out.

Renault has learnt from the Nissan SUV experience so much so that its newly upgraded range topped by the Koleos, is now starting to make a big impression. The Renault Kadjar joined the previous Koleos, while the new Koleos that I’ve been drivingly recently, is a refreshing take on the SUV. 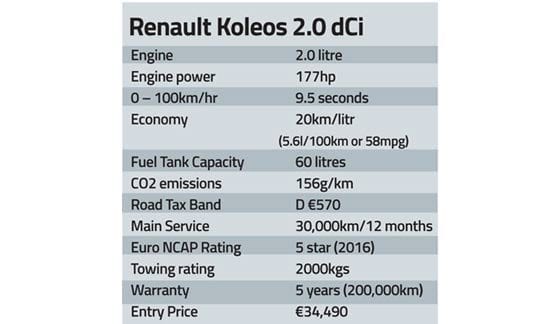 And with Renault and Nissan now part of the same motoring family, it’s not surprising that this new Koleos for me will have to be compared with the Nissan X-Trail. Both offer a solid 4×4 driving experience, with similar technical features under their respective bonnets.

A closer look reveals that these two seven seat SUV’s are not that far apart, in terms of owner choice, if only on specification or how they are presented and then they are equally close on the price. For many families these larger seven seat are the only option and give a modern choice to those who have been driving multi-purpose vehicles (MPV’s) up to now.

This new Renault Koleos has grown in size and stature compared to the previous model. The Renault Koleos is available with two diesel engine options and my test car was well equipped with the larger 2.0 litre dCi Renault engine that pumps out 177bhp. The engine is a little noisy at low revs, and quickly blends into a smoother unit as the accelerator pedal is depressed. 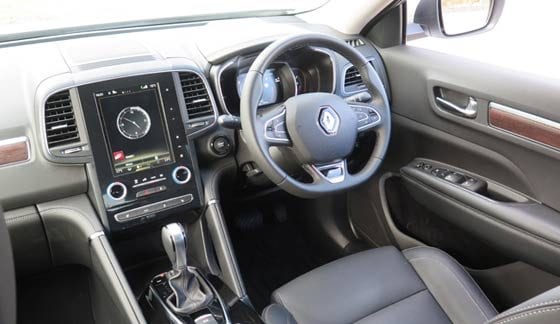 I found that the engine power and torque were more than ample for this medium to large SUV. The Koleos that I drove came with the seven-speed automatic gearbox that’s allows for faster acceleration than the manual version. And there is no difference in economy worth talking about.

For me that automatic Auto X-Tronic option is the automatic choice (excuse the pun), because its smooth and easy to use. It is well matched to the engine’s 380Nm of torque so the gear changes just flow, making driving easy, comfortable and pleasurable.

Out on the road, the engine and automatic gearbox combination also means the potential for reasonably good diesel economy. I found that the smoothness of the driving experience at a motorway cruising speed of 120km/hr meant that this car settled into an effortless 2000rpm which ensured good economy.

Over almost 600km of a test drive, this economy figure was about 22% over the rated figure of 20km/litre (5.6l/100km or 58mpg) and that’s almost exactly the same economy figure that Nissan is quoting for the similar powered X-Trail.

For me that meant that the 60-litre capacity fuel tank could give a round trip of over 750km, which is a good economy level for a solid SUV that has good off-road ability when called on. Despite this, I had expected slightly better. 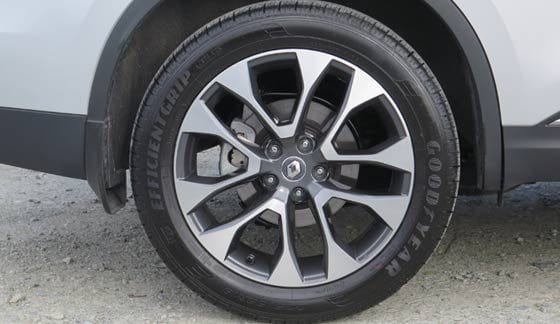 If you want to venture off-road this new Koleos has some ability, but its real strength is its ability to automatically deal with changing road conditions, by engaging the four-lock wheel-drive on demand. The driver can override this with a simple button to include the Lock Mode which gives a permanent drive to all four wheels. Once your speed increases the system knows that road conditions have improved and it reverts to a more economical two-wheel-drive mode, driving the front wheels only.

It’s easy to get comfortable with the Renault control layout, especially as the large screen makes everything very clear. Setting the mobile phone Bluetooth system was easy and the sat-nav system was user-friendly, also due to the large 8.7in portrait style, centrally-mounted touch-screen size. 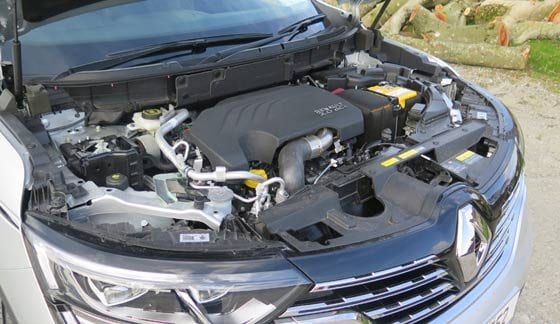 Cash-strapped motorists get a dig out from...

Trainer Tips: ‘Tis the season to get...

08/11/2018
We use cookies to ensure that we give you the best experience on our website. If you continue to use this site we will assume that you are happy with it.Ok