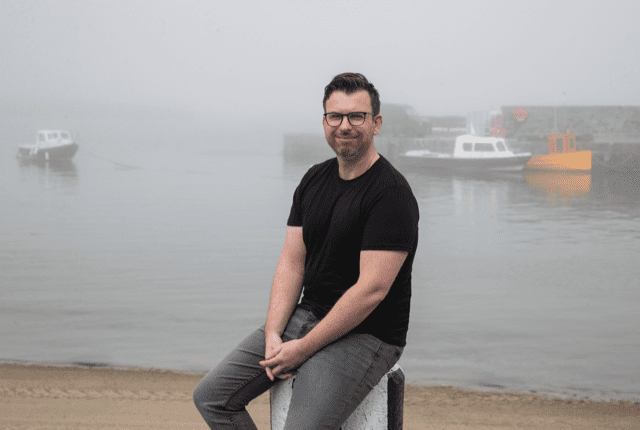 The pandemic has generated much discussion on the topic of mental health. For Keith Russell, from Rush, it proved to be the catalyst he needed to address an eating disorder he had been harbouring for 20 years. Now, he’s sharing his story to encourage other people, especially men, to break the stigma and seek help.

“When the pandemic kicked in and everyone was working from home, it gave me a lot of time to think. I’ve known for a long time that I had something and I had been diagnosed with depression and anxiety in the past but they had never actually been linked back to body dysmorphia or an eating disorder.

“I think that was partly because I am a man and men are less inclined to speak about this kind of a struggle. For a long time I knew I had an issue with food but I’d been sweeping it under the rug and getting on with things.

“I started a podcast about mental health and had been encouraged by others to write about my personal struggles, which I wasn’t very confident about. I wrote a blog post and sat on it for about two weeks before sharing it online. I wrote about my experience with anxiety and how I used sport as a form of escapism and I got such a good response that everything kind of went from there.

“The more I wrote on the blog and I spoke to people on the podcast, the more I learned about my own condition. I had a nutritionist as a guest on the podcast and learned about body dysmorphia which was when the penny dropped for me. I realised that this was something that I had been suffering with for about twenty years.

“The more I started to talk about it and the more positive feedback I received, the more comfortable I felt talking about it.  I started to get a lot of emails through my website from people who my story resonated with and a lot of these messages were from men who, similar to me, knew that they had an issue but had never spoken of it or placed a label on it. I had never even heard of body dysmorphia until six months ago but once I had admitted it to myself and began to speak openly, there was no going back.

“I’m at the start of learning about intuitive eating, which extracts the emotion from food and would be more like how children eat, only eating when they’re hungry and stopping when they’re full. I’m also trying to use exercise less to dictate how I look but to affect how I feel. Rather than running the legs off myself in the gym, I’m using yoga to get the endorphins flowing and to tackle my anxiety.

“Something that Niamh also remarked on and that I’ve noticed too is that even when men are dealing with an eating disorder, they’re far more likely to stay anonymous. I’ve spoken to some guys who really wanted to talk but didn’t want to go on the podcast or to use their name on a blog post. I think that comes down to a stigma, it’s there for everyone but particularly for men and eating disorders because they think they need to live up to certain ideals to seem strong and are more frightened to appear vulnerable or weak.

“When people hear the term ‘eating disorder’, they think of anorexia or bulimia but there are a lot of other eating disorders. In my case, binge eating disorder comes into play because my body dysmorphia led to me feeling so bad about myself that I would then comfort eat, which would trigger despair and guilt. Then, I would try to go to the gym to tackle that guilt but I was so riddled with anxiety that I couldn’t really exercise and then the process would begin again.

“That’s where the name of my podcast and website The Endless Spiral came from because that’s how it feels to have any mental health difficulties, I think. You feel caught in a loop of depression, misery and anxiety. That’s why I’m talking about this and getting better and I think there is a light at the end of the tunnel for everyone and it helps when you can see that in others. I think being a man was the main reason why I’m only dealing with this now, after twenty years but it’s better late than never and I’m so glad that I am”.

You can learn more about how Keith and others are coping with mental health struggles via the podcast or blogs on theendlessspiral.com or follow the instagram @theendspiral