Getting to Canada just got a whole lot easier

Thanks to a new direct service from Dublin to Montreal with Air Canada, from June 2018 a visit to this fascinating country just got a whole lot easier.

Canada offers something for everyone – its landscape is as vast and varied as its people who, by the way, are just as friendly as everyone says. Montreal’s welcoming atmosphere and diverse culture earned it the title of North America’s leading host city for international events.Its native and often multilingual Montrealers are quick to strike up a conversation in the hope of getting to know you better.

Not surprisingly, this innate sense of hospitality makes this city a natural hub for festivals which fill the city’s events calendar one after the other.
Chromatic runs from May 26 to June 2 with an eclectic range of arts – visual, digital, performance, interactive and lots more – at a host of events including concerts, exhibitions, screenings, workshops and parties.

Festival TransAmeriques from May 23 to June 7 celebrates new works in contemporary dance and theatre showcasing both established and emerging artists.
The Montreal Fringe Festival (known as “the party Fringe” on the Fringe circuit) turns 28 this year with some 800 performances featuring over 500 artists in theatre, dance, music, comedy, magic and much more. 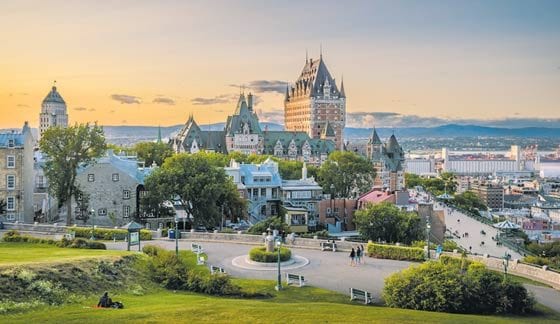 Quebec is a gorgeous city surrounded by breathtaking landscapes

The action centres on more than 20 venues around the Plateau Mont-Royal and Mile End and the nightly “thirteenth hour” variety show and dance party ensures the Fringe lives up to its reputation.
As if you needed more digital arts festival Elektra runs from June 26 to July 1, while Montreal Folk Festival on the Canal also runs in June as does the Mural Festival of urban art and graffiti.

The Canada Grand Prix revs up from June 7-10, Les FrancoFolies de Montreal offers an average of 70 indoor shows and 180 free outdoor shows from June 7-16, while world-class pyrotechnicians descend on the city for L’International des Feux Loto-Quebec from July 7 – August 8.

The best spot to watch the fireworks is from the grandstands at La Ronde where you’ll see them take off from Lac des Dauphins and illuminate the night sky.
Experience Montreal’s wonder and charm for yourself with holiday deals from American Holidays.

Or why not blow the budget and experience the best of Eastern Canada with a visit to Toronto, Niagara Falls, Quebec and Montreal for €1,959pp.
Price includes return flights, seven nights’ accommodation, sight seeing, taxes and charges (travel October 2018, ref no: 1568725).

Further details from American Holidays on 01 6733804, www.americanholidays.com or drop into their office at 18-19 Duke Street (just off Grafton Street) where expert staff will help you plan the holiday of a lifetime.

Ryan a doubt for Lyon tie

Centre yourself with an amazing Athlone staycation

Catch the Winter Sun with some of these...

Volunteers are feeding the homeless as the Government...

An unrushed stay near the chimes of...

27/06/2013
We use cookies to ensure that we give you the best experience on our website. If you continue to use this site we will assume that you are happy with it.Ok