If you’re a fan of Ska, or just good, original music, you won’t want to miss Dave Wakeling when he hits Whelan’s with Two Ttone legends The Beat this Thursday night.

The founding member of the 80s New Wave sensation will take a trip down memory lane at Dublin’s hottest live music venue, with old hits including Mirror In The Bathroom, Hands Off…She’s Mine and Tears Of A Clown sure to get you children of the 70s and 80s all nostaligic. 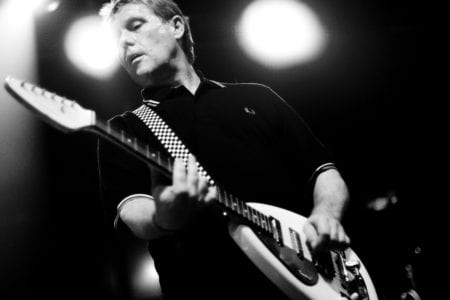 Speaking of memory lane, here’s how The Beat got started..

One tempestuous weekend in late March 1979 was not only the date of the Three Mile Island nuclear incident, but also, in Birmingham, the very first show by a nascent band known as The Beat.

Introduced as “the hottest thing since the Pennsylvania meltdown”, the band had a sense that the next few years could well be explosive!

When The Beat rushed on to the music scene in 1979, it was a time of social, political and musical upheaval. Into this storm came The Beat, trying to calm the waters with their simple message of love and unity set to a great dance beat.

The Beat were all about inclusion, rather than exclusion, and this showed in their personnel and their music influences. The original band consisted of Dave Wakeling on vocals and guitar, Andy Cox on guitar, David Steele on bass, and Everett Morton on drums – later additions Ranking Roger (toasting) and foundational First Wave Ska legend Saxa (saxophone) completed the outfit. The band crossed over fluidly between soul, reggae, pop and punk, and from these disparate pieces they created an infectious dance rhythm. Along with their contemporaries The Specials, The Selecter, and Madness, the band became an overnight sensation and one of the most popular and influential bands of the British Two Tone Ska movement.

By Christmas of 1979, The Beat were riding high in the UK charts with their first single, a smoking remake of the classic Smokey Robinson tune Tears of a Clown. Over the course of the next five years The Beat toured relentlessly and released three studio albums: I Just Can’t Stop It, Wh’appen, and Special Beat Service. The band toured the world, touring with such artists as David Bowie, The Police, REM, The Clash, The Talking Heads, The Pretenders, and The Specials, to name but a few. The Beat kept scoring hits with tunes that have now become so popular that it’s hard to remember a time when they didn’t exist, such as Mirror in the Bathroom, Save it for Later, I Confess, Stand Down Margaret, and their serene cover of the Andy William penned Can’t Get Used To Losing You.

Despite their huge success, The Beat continued singing about and acting on the problems we all face. They donated all the profits from their highly successful single version of Stand Down Margaret to the Committee for Nuclear Disarmament. They donated their music to causes including the anti-nuclear benefit album Life in The European Theatre, The World of Music and Dance album focusing on indigenous people’s art, and lent their voices to The Special AKA’santhemic freedom cry Free Nelson Mandela, to name but a few.

Dave Wakeling once told me that every great band only has three really good albums. And true to form, The Beat decided to call it quits after their third album, Special Beat Service. Of course, that was not the last we would hear from the Beat boys.

After The Beat, Dave Wakeling formed General Public with his mate Roger. The band took off quickly, scoring numerous hits off the their three studio albums, including Tenderness, So Hot You’re Cool, Never You Done That, Come Again, Too Much or Nothing, and I’ll Take You There. Dave’s good looks and soulful crooning combined brilliantly with Roger’s gravelly toasting, high intensity showmanship and upful beat, and GP took the critics and fans by storm. While Dave was penning hits Stateside, Andy Cox and David Steele were putting their own band together. Andy and Davidplaced an ad for a singer on MTv, and received an extraordinary gift, in the form of one Roland Gift. With Roland onboard, the Fine Young Cannibals was formed and right from the release of their first single Johnny Come Home, the band was a hit. Their two studio albums scored multiple hit singles, with tunes such as She Drives Me Crazy and Good Thingbecoming instant classics. Not being slackers either, Saxa and Everett Morton put together their own band, International Beat, blending modern pop with traditional Jamaican rhythms to form a wonderful hybrid sound. International Beat toured around the world and released two live albums, including cameos from Daveand Roger.

Combined, all these bands scored multi-platinum record sales, sold out shows all over the world, and, most importantly, universal fan approval because they kept The Beat alive!

That ember was nursed back into a roaring flame in February 2003, when a dream came true for many Beat fans as the band reunited for a UK tour, culminating in a sold out command performance at the prestigious Royal Festival Hall! It was a wonderful night for the band and their fans.

Consummate showman that he is, Dave Wakeling has continued to keep The Beat alive and strong. How could he not? Dave continues to tour as The Beat starringDave Wakeling with an amazing all-star ska backing band playing all the hits of The Beat, General Public, and his new songs.

You just can’t stop The Beat!

Vandals target Our Lady statue in dead of night

Helping you get through Lockdown

Try new ways to get fit and put...

Tuck into a slice of Leo Burdock history...

Amazing Annie will charm you

Bewley’s swinging back into brunch

10/05/2018
We use cookies to ensure that we give you the best experience on our website. If you continue to use this site we will assume that you are happy with it.Ok