WAR for the Planet of the Apes (Cert 12A, 140 mins) closes off what has been perhaps the most consistent franchise in recent memory, following the surprise success of 2011’s Rise, and the dystopian adventure of its 2014 sequel.
Dawn may have come and gone, but War, again directed by Matt Reeves, finds the series at its darkest point.
A brief introductory summary skips lengthy exposition and drops us straight into the action; for the uninitiated, apes around the world have started to evolve intellectually and stand erect – some turned against humans while others simply want to live separately in peace.
The greatest threat to man, however, is the ape-borne virus that has wiped out the vast majority of humankind in the span of 15 years.
Following the events of Dawn, what’s left of the US military has been sent in to neutralise the ape threat.
Lead chimp Caesar’s (Andy Serkis) army are showing rapidly increased signs of intelligence but just want the war with the humans to end.
When “The Colonel” (Woody Harrelson) leads the human army into the apes’ outpost, resulting in tragedy, Caesar sets out on a quest for revenge.
War comes in at a neat two-hours and 40 minutes, packing every second of its run time with expertly scripted moral storytelling.
This is a tale of revenge that takes on board influences from classic WWII escape movies like The Great Escape and Bridge on the River Kwai, while surpassing most contemporary war narratives with its delicate handling of themes such as man’s inhumanity to man and the ultimate futility of conflict. 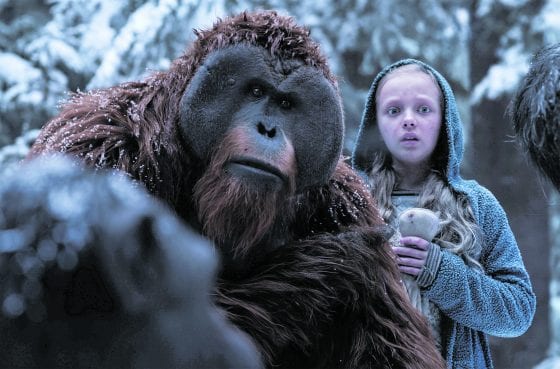 With yet another incredible motion-capture performance from Serkis, War often feels like a religious parable (a “holy war”, according to The Colonel) and while it often feels melancholy, occasionally downright grim, it never grates or burdens us with melodrama.
Indeed, for all the actor has done for the medium, it’s a travesty that Serkis hasn’t yet received any proper awards season recognition – even a nod is in order at this stage.
Most admirably, for all the masterful effects work in War, the film gives far more time to narrative, drama, tension and emotion than it does to big action set-pieces or messy displays of CGI a-la this month’s Transformers: The Last Night.
The creature work is deceptively real here, never more so than in the face of the aging orang-utan, Maurice (Karin Konoval), who is quite often indistinguishable from any real life counterpart.
Harrelson’s villain is the perfect foil to Caesar’s cool-headed leader: a menacing, unhinged maniac on his own quest for revenge, waging a war in which few lives are considered sacred.
Any questioning of his command is quickly, summarily cut down. However, as with any believable villain, the reasons for his maniacal actions are somewhat understandable. War does a great job of instilling empathy on all sides.
War rounds out the prequel trilogy in style. It may drag at times around the middle act, but all ends are tied up nicely, leading toward the unfortunately dystopian world that fans of the original know is coming.
There’s some oddly misjudged comic relief from Steve Zahn, at odds with the darker tone of the film, but this epic, sweeping adventure is an extremely satisfying end to a series that has delivered consistently with each instalment – a rarity in this age of sequels and reboots.
Verdict: 8/10

David Keenan: “Art can change your life, and...

Jafaris: “Whatever I put into music, I find...

Hoping for help to drive business

09/06/2016
We use cookies to ensure that we give you the best experience on our website. If you continue to use this site we will assume that you are happy with it.Ok