Ford has delivered a new sense of driver satisfaction in the latest Fiesta model, which offers a wider specification range with more options than ever before. Michael Moroney drove the new Fiesta with its much acclaimed new EcoBoost engine and is impressed with all other than the price.

Ford’s latest generation Fiesta is the result of a forty year old success story for the company, both in Ireland and across Europe. The Fiesta is Ford’s second most popular car in Ireland, behind the Focus and it is the market leader in its segment.
With every generation of the Fiesta the car seems to have gotten bigger and more spacious, almost out growing it segment identity as a supermini. The new generation Fiesta builds on that customer demand for a better driving feel, and like all success stories, change has to be careful rather than radical to keep Fiesta customers coming back. 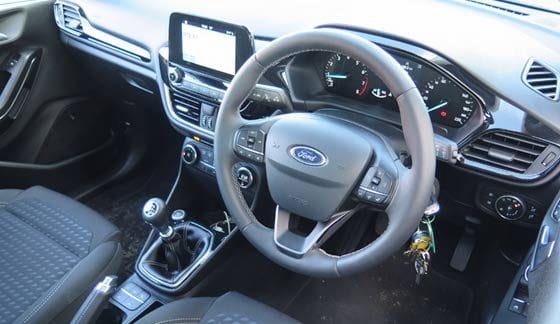 I’ve had a few versions of the new Ford Fiesta out on test in recent weeks, after the snow storms of early March rendered my earlier attempts impossible.
The Fiesta first impressions are good, it’s design different, while still most obviously a Fiesta. The overall dimensions of the car are very similar to the previous versions as is the external design style. There are subtle differences to the lighting and they are more pronounced at the rear end, where the lighting design has gone from a vertical to a horizontal concept.

Ford claims to have made multiple changes to the car in terms of engineering for better safety and driver comfort. There are subtle changes to the structure of the car to give it more strength, but it was the improved driving comfort and smoothness that were most noticeable to me. 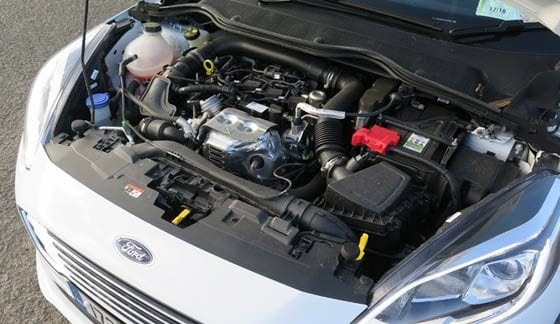 My test version was the Fiesta ST version, while the entry level Fiesta comes in Zetec specification with a lot less in terms of features. The test car was powered by Ford’s impressive 100bhp EcoBoost petrol engine.

The three-cylinder turbo-petrol engine was very smooth to drive and comes with ample power, even if the torque rating shows a minor drop from the current models. Compared with previous models, this car is faster with improved acceleration and marginally better economy.

Ford offers an entry level Fiesta with an improved new 1.1 litre petrol engine at a price that’s more competitive than the EcoBoost versions. This version is a shade slower with the benefit of marginally better fuel economy.

Ford claims that fuel efficiency is further enhanced with Auto Start Stop technology offered for all engines and Active Grille Shutter for 1.0-litre EcoBoost versions. The Fiesta comes with a new Eco button for manual transmissions which adjusts engine and throttle settings to help drivers save even more fuel. 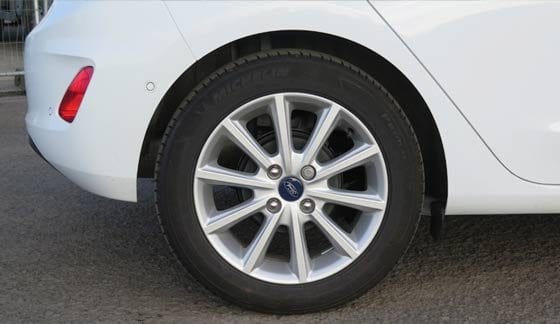 Out on the road the new Fiesta comes with an economy rating of 23km/litre (4.3/100km or 66mpg), which is marginally better than in the past. In practice I found that difficult to achieve and my 650km test run revealed a figure more than 30% higher, so I’m not sure how achievable the official figure actually is.

The driving comfort is one of the outstanding features of this new Fiesta. The new six-speed manual gearbox was especially comfortable to use. Ford claims that the new gearbox design also brings some fuel economy benefits.

You will be impressed with the internal layout of the Fiesta especially as you move up the specification ladder. The entry level Zetec models come with Ford’s basic radio with 4.2 in TFT screen and 6 speakers. Moving up a grade to the Titanium versions adds a much more impressive 6.5in touchscreen system, with Ford Sync 3 emergency system and Apple Carplay plus Android Auto and that gives a completely different feeling to driving the car. 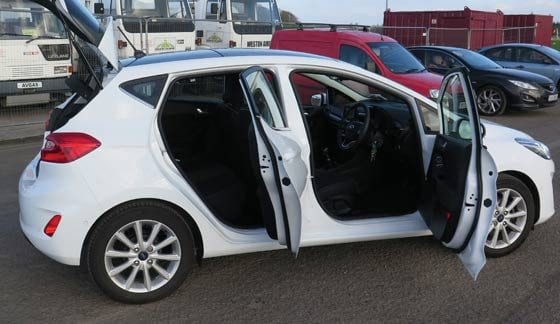 This new Fiesta delivers the more sophisticated range of driver assistance technologies and connectivity features than in the past, including the entry level models. These come with a lane-keeping alert and aid system, speed limiter, seatbelt minder, rear centre headrest auto-headlamps and ESP with hill start assist. The new Fiesta comes with two ISO-Fix couplings in the rear seats and has a Euro NCAP 5 star safety rating.

This new Fiesta is an impressive car to drive, and is marginally shorter than the competing new Volkswagen Polo. The Polo beats it a little in terms of boot space, and the spare wheel is not included.

While the entry level Fiesta prices look attractive at €16,650, you will need to add almost €4,000 to that price to get a five-door EcoBoost version, which seems like a big price jump.
Titanium spec versions, which is the minimum desirable level start at €20,150 for the entry models, which means that this much improved Fiesta is also going to cost you a little more. The good news is that Ford dealers are now offering a seven-year warranty on Fiesta models with €1,500 discounts, so there’s a new sense of value in the Fiesta, but don’t wait too long.

The Scratch saddle up in support of asylum...

Enjoy a magical weekend of music at the...

Local businesses the beating heart of their community

Theresa first in line to lend a helping...

13/02/2020
We use cookies to ensure that we give you the best experience on our website. If you continue to use this site we will assume that you are happy with it.Ok