Jaguar’s F-Pace was the luxury brand’s first endeavour in the SUV market and it’s an impressive one, as Michael Moroney found out when he drove the solid performer for a four day test drive in typical Irish autumn conditions.
Jaguar has borrowed some of the Land Rover heritage for its F-Pace SUV that provides a serious challenge in the larger SUV market. For Jaguar, the F-Pace was the first SUV ever produced in the Jaguar name and now it has been followed by the recently introduced and more compact E-Pace model, which has  just arrived at Dublin Jaguar dealerships.

More than one year from its initial launch, the Jaguar F-Pace now well established in the market with its significant design appeal and I tend to rank it against the likes of the Audi Q5 and BMW X3. The F-Pace has a significant syle of its own and brings with it some impressive features that are increasingly being offered in other ranges.

The most important feature of the new Jaguar F-Pace is its weight. Jaguar is using a new lightweight aluminium chassis to shave kilos of the weight compared with the likes of the Land Rover Discovery Sport, while still guaranteeing strength and safety.

I recently took the F-Pace on a test that mixed city driving an interesting mix of country routes and motorway driving. On the smaller roads, the conditions provided a test of handling and suspension.

I had previously driven the F-Pace during its launch where we took it off-road to test its agility. Back then we took the luxury SUV across some off-road driving areas that included mud and water, and some frighteningly steep hills that tested the new Jaguar Adaptive Surface Response and All-Surface Progress Control systems. As we drove across steep inclines, the car’s engine management and control systems were re-assuring if nothing else.

So in terms of off-road ability coupled with on-road manners, this new SUV can set new standards, even if these off-road features are rarely used by real Jaguar drivers.

The new Jaguar F-Pace is targeting a new market, with more female drivers and those of a younger age very much in mind. With an entry price of €47,295 for the 180bhp version, this new SUV competes very well on price terms against the likes of the Audi Q5, BMW X3 and its own Land Discovery Sport or smaller Range Rover Evoque. The F-Pace sets its own standard in terms of value and like all cars in this sector of the market there is plenty of scope to add accessories to enhance its looks.

This solid looking Jaguar F-Pace provides lots of technology goodies as well as road performance stuff. Jaguar claims that its InControl Touch Pro system is the world’s most advanced infotainment system. It has been designed in-house by Jaguar Land Rover to make every journey easier and more connected and uses a 10.2-inch tablet-style touchscreen.

The system is easy to use and features impressive quality graphics. It can be used to connect up to eight devices on the Wi-Fi hotspot so that you can transform the SUV into a mobile office or entertainment centre.

Among the other new features is the Jaguar Activity Key. This looks like a water resistant watch strap and it acts as type of locking device, even allowing you to leave your keys in the car. Just place it near the rear Jaguar logo after pressing the boot opening button and the F-Pace opens or closes depending on your previous action. This means that in future your key will be a watchstrap, or it could end up as one of the new generation smart watches such as the Apple iWatch or a Fitbit.

There are a number of engine options for the F-Pace ranging from the entry level 163bhp 2.0-litre diesel to a 3.0-litre V6 diesel and a similar size V6 petrol engine. The test car was powered by the 180bhp version of the 2.0-litre Jaguar Land Rover Ingenium engine.

I found that this engine is more than adequate for the SUV across some very hilly driving conditions, while smooth and with plenty of torque for longer and comfortable motorway drives. Relative to the luxury end SUV competition, this engine is smooth and lower performing in brake horsepower terms, while the lighter weight of the F-Pace ensures good economy and a lively pace.

This is a relatively low CO2 engine at 134g/km giving an annual road tax rate of a modest €280. Jaguar uses AdBlue diesel fuel additive to achieve this, with the separate blue coloured filler cap beside the diesel filler car. Driving style will dictate your AdBlue usage, but generally it only requires infrequent topping up.

This Jaguar F-Pace is price competitive and has also set some new standards, in technical features and off-road ability. The design is distinctive in a positive way that combines strength with that unique Jaguar identity. It will appeal to those who want to be seen and they will. 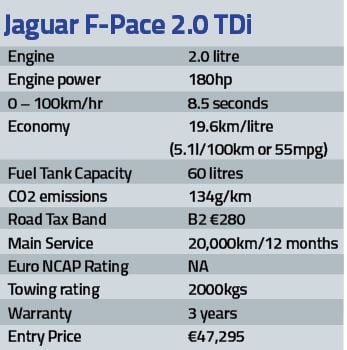 This beef negimaki is truly a delish dish

Dog of the Week: Meet the lovable...

A Nomadic journey to set sail for

Get ready to find a dream family...

04/01/2017
We use cookies to ensure that we give you the best experience on our website. If you continue to use this site we will assume that you are happy with it.Ok