Edging Fordwards in the SUV market

Ford’s largest SUV offering is the Edge, which has been upgraded with a new ST offering for this year. And while there is more to come for the Edge in terms of power, Michael Moroney found this to be a solid and strong SUV that would be comfortable in any suburban driveway.

Ford is well known in North America for its dominance of the SUV and pick-up truck market while here in Europe the blue oval brand is playing catch-up with the SUV competition. That’s changing following the arrival of the new Ford Edge, a larger and more serious SUV than the current mid-size Kuga. 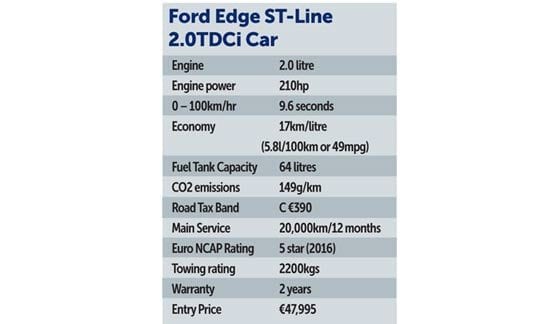 The size and performance put the Edge well ahead of the Kuga so it’s a match for the bigger players. For me, the Edge competes with the likes of the Audi Q5, BMW X3 and Land Rover Discovery Sport. Relative to these the new Ford Edge is pricey while it has an impressive specification with a lot included that will be add-ons, and expensive ones at that, from the others.

For the ST-Line version of the Edge, Ford’s new 2.0 litre turbo-diesel engine gets a power boost in terms of its performance, while with no change in fuel economy. This engine is very smooth and lively so that it accelerates with absolute ease when coupled with the equally smooth Powershift automatic manual gearbox.
The base model in the range is rated at 180bhp, while I drove the more powerful 210bhp version. This power means that the Edge can accelerate fast and is almost a match for the BMW X3. 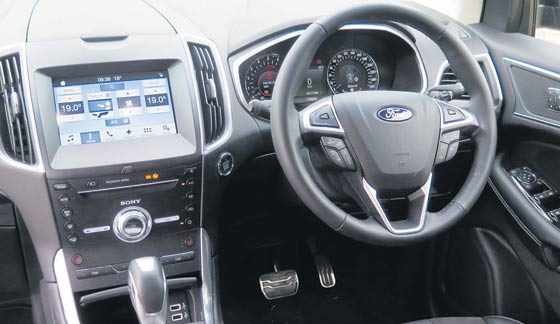 Push the pedal to the floor and it has the same solid feel that you expect from quality mid-range SUV’s and it hugs the roads. There is great road holding and confident cornering, even on smaller roads.
Adding extra power has not put a dent on the fuel economy figures. The official figures at 17km/litre (5.8l/100km or 49mpg) will look good on paper, but on the road it was a far different experience. I found that getting to 15km/litre (42mpg) was a challenge. The big engine power and torque gives expectations of good towing ability. Ford has upgraded the

Edge towing rating to 2.2 tonnes with a neat removable tow-bar included.
The Edge is a spacious SUV with good passenger space in the rear and solid feeling seats up front that have loads of adjustment. I was comfortable within minutes after taking to the seat. The rear legroom is good and this SUV is designed for three adults in the back. 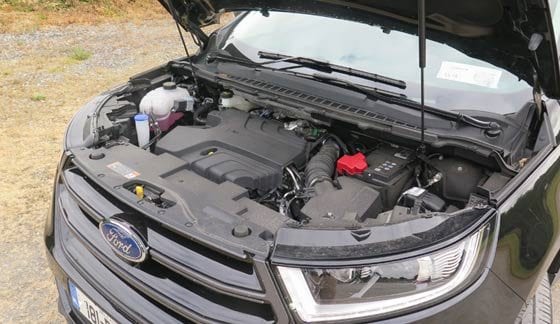 The boot is also very spacious with plenty of load capacity at 800 litres with five seats, if you load it to the roof. A space saver spare wheel included.
The Edge has lots of safety features including the Ford Sync system included as standard. The Edge has achieved a Euro NCAP 5-Star crash test rating since launch in 2016 to add to its impressive safety credentials.

The Edge comes with Pre-Collision Assist with Pedestrian Detection to apply the brakes to avoid collisions with other vehicles or even pedestrians. And finally it is fitted with Ford Adaptive Steering, which claims to automatically adjust the steering ratio according to speed for more precise steering. 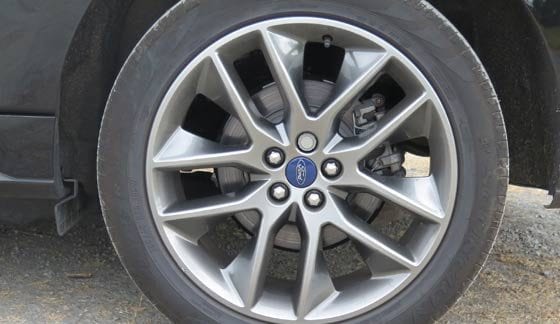 There are two USB connection points and facility to use an SD navigation card. The Sony brand radio system is very impressive and the Ford sat-nav system was clear using a large centre screen that doubles as the screen for the reversing camera.
Ford has sharpened the pen on the Edge entry price since it was introduced in 2016 to start now at €47,995, that’s significantly more competitive than in the past. The price jump from the Ford Kuga to the Edge is significant, while you are getting a more powerful, spacious and better performing SUV.

07/01/2016
We use cookies to ensure that we give you the best experience on our website. If you continue to use this site we will assume that you are happy with it.Ok