Kilmainham Gaol opened in 1796 as the new County Gaol for Dublin. It closed its doors in 1924.

Today the building symbolises the tradition of militant and constitutional nationalism from the rebellion of 1798 to the Irish Civil War of 1922-23. Leaders of the rebellions of 1798, 1803, 1848,1867 and 1916 were detained and in some cases executed here.

Many members of the Irish Republican movement during the Anglo-Irish War (1919-21) were also detained in Kilmainham Gaol, guarded by British troops.

Names such as Robert Emmet, Anne Devlin, Charles Stewart Parnell and the leaders of 1916 will always be associated with the building.

It should not be forgotten however that, as a county gaol, Kilmainham held thousands of ordinary men, women and children. Their crimes ranged from petty offences such as stealing food to more serious crimes such as murder or rape.

Kilmainham Gaol Museum is open all year round, except the 24th, 25th, and 26th of December.

The guided tours are excellent. Pre-booking is essential.

Highlight: The plaque and two crosses to commemorate the 14 leaders of the Easter Rising who were executed.

This is the most famous yard in Kilmainham Gaol. Originally, it was used for hard labour. Huts used to line the walls so that solitary labour was possible; these no longer survive, although their outlines can be seen in the ground.

The yard was mainly used by men who had been sentenced to hard labour, and they would spend their time manually breaking up stones.

Women who had received the same sentence would work out their time in the laundry. It was here that fourteen leaders of the Easter Rising were executed in May 1916. This is commemorated today by a plaque and two crosses in the Yard.

Highlight: The wooden altar made in 1882 by Belfast carpenter James Lalor, who was an inmate at the time. 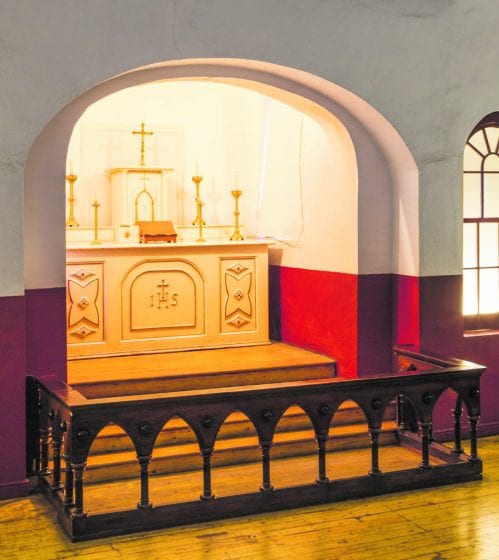 There are two chapels inside the walls of Kilmainham Gaol – one Catholic and one Protestant. Only the Catholic chapel is open to the public today.

This red-walled chapel is found on the first floor (the other chapel is on the top floor and was painted blue).

The wooden altar here was made in 1882 by Belfast carpenter James Lalor, an inmate at the time.

Catholic prisoners generally attended Mass in this chapel every Sunday; it was sometimes the only place they would meet each other, depending on their level of isolation and the period in which they were inmates. 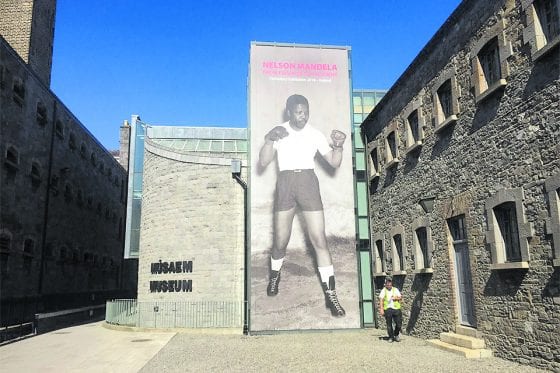 This exhibition opened July 13, 2018, and will be open until January 12, 2019.
“From Prisoner to President” the exhibition celebrates the life of Nelson Mandela.

It explores Mandela’s extraordinary life through five themes – Leader, Comrade, Negotiator, Prisoner, Statesman. In each theme, the narrative is presented through evocative large-scale images and text, supported by films, photographs and displays of original artefacts.

This exhibition also highlights the strength and breadth of Ireland’s relationship with South Africa, from Ireland’s support for the anti-apartheid movement, through to the vibrant and multifaceted partnership which exists between Ireland & South Africa today.

Dog of the Week: Meet Alex

Gift of the Gaz: ‘Vote for Gaz, I do a great wave and I won’t embarrass the nation’

No ordinary day for Donal

05/06/2019
We use cookies to ensure that we give you the best experience on our website. If you continue to use this site we will assume that you are happy with it.Ok