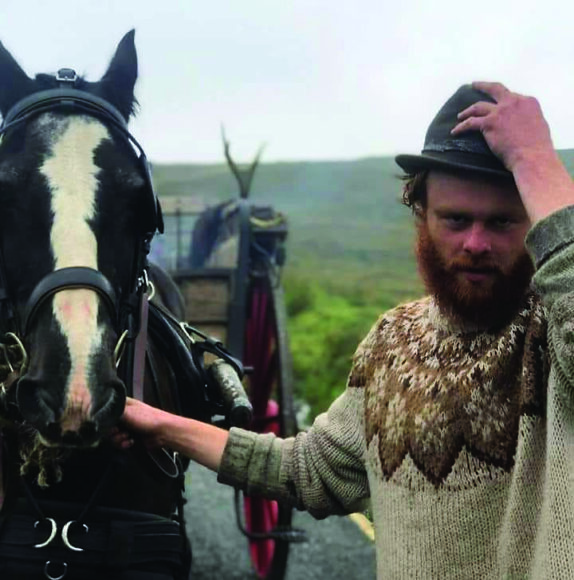 Darragh Carroll’s Facebook page flags him as a ‘former chef de partie at Bearfoot Bistro’ but in recent weeks, his escapades have captured the hearts of the nation.

After 11 exhaustive months, nine of them on the North Sea, he is now on dry land, and docked up on Valentia Island, Co Kerry to repair his tired and battered old boat, the Ran.

What is the purpose of Darragh’s travels, and his determination to transport a fire from an ancient Viking site in Norway to the Hill of Uisneach here in Ireland?

Whilst visiting a Norse pagan site, he had a dream, which was later interpreted for him by a Viking druid, and he was told to carry a fire from Norway all the way to the Hill of Uisneach, which is considered the Sacred Centre of Ireland, a flame to repair the imbalance in his native land.

His love of nature, of cooking wild food and a fascination with gypsy culture saw Darragh, from Rathfarnham, take up work in a friend’s restaurant on the Norwegian island of Tramoya.

Here he was happy to forage for mushrooms, wild herbs, mussels, berries, oysters and fish and to gain more experience in wild cooking.

While traversing the island’s mature oak forests, Darragh came across an ancient stone circle and evidence of Norway’s pagan past. A recurring vision haunted him, and no matter how hard he tried to dismiss it, he finally accepted his mission was to carry the flame fertility and carry it to a place of need.

Even then, the notion sounded absurd, as no doubt it did to his parents at home in Rathfarnham. By now Darragh had researched the history of the Vikings and Norse traditions, and the similarities with Ireland were compelling.

A Viking descendant told Darragh he had an old boat, the Ran, which was meant for the journey. Despite being shipwrecked for two months in Scotland, Darragh claims the boat is a part of him now.

Darragh told Dublin Gazette: “The Ran and I have experienced so much together, she has provided a home for me, heat from the flame to stay warm and cook, I owe her a lot.”

In recent months, it has been steady horse Samfire pulling a cart with Darragh and his flame across Ireland.

He explained: “The fire is continually lit and looked after in Carnahalla while I get the Ran out of the water for the winter. I’m on Valentia Island to carry out repairs as she was leaking water and needs to be on dry dock now.”

The young Dublin man, who started his working life as a butcher in FX Buckley’s, is now an avid boat man, horse man, skilled forager, adept at wild cooking, along with now having a deep knowledge of Norse and ancient Irish history.

“My family initially thought I was half mad but now that I’ve overcome all the breakdowns and obstacles, they are proud of my accomplishments.

“Even my mother Eunice thoroughly enjoyed the two days going through Limerick on the horse and cart with me recently – we got such a welcome everywhere we went.”

The flame really does inspire positivity – people along Darragh’s travels are equally fascinated and extend food and hospitality at every turn.

“It’s a powerful experience to be pulling good will from everywhere,” he said. “Fire represents hope, inspiration, fertility.

“I really feel I’m bringing people back to old memories, of community hospitality – there’s something about the smell of the fire that just takes people back to nature.”

“I have now to contact Richard, the Norwegian boatman to confirm the final journey, to complete it together, ending at the Hill of Uisneach.”

What will the young chef-adventurer do after this compelling journey has ended? A documentary may be on the cards, it seems.

He said: “I’ve kept footage from day one of my journey so I will be looking to work really creative people. It should make for a final incredible piece or work”.

But that’s not all Darragh envisages. He’d love to create an underground primitive restaurant with ancient, traditional Irish accommodation.

“It’s never before done before and would be a unique setting. At least 15 courses to experience, a max of 12 people taking them from plants and roots eaten by early inhabitants to food through the Stone Age, the Iron Age, to the Vikings.

“A storyteller would talk the guests through the eras. I’m thinking of comfortable but traditional huts, thatched and built with animal skins and open fires within.

“But after the fire reaches the Hill of Uisneach, I need a little down time to restore the Ran, and to accumulate all my travels and experiences. After that, exciting times ahead.”

‘A natural fit’: Naomi Clarke on trends, style and her Littlewoods collab

Plenty of exciting packages for Dubliners in this city centre hotel