As 2018 heralds a brand new motoring year there are new cars on the way for Dublin motorists across almost every brand. There are more options than ever in terms of power source and while petrol and diesel power is still dominant, the electric and hybrid car options are expanding at a phenomenal rate. Michael Moroney takes a look at some of the new cars on offer for 2018.

Look across any of the new car offerings across the brands for 2018 and you’ll find they offer a new compact SUV. The market for smaller cars with SUV styling and a higher driving position has mushroomed across Europe and Dublin drivers are certainly following that trend.

Car buyers are moving with another trend and that is petrol power after the issues around diesel emission cheating were further exposed. Governments across Europe have reacted with tougher regulations for engine emissions and diesel sales have taken a hit, but not as much in Ireland, just yet.

Petrol engine design has improved at the same time, lowering emissions and raising performance at the same time. The generation three-cylinder petrol engines are showing promise and growing in driver acceptance as well as being economical.

More significant engine changes are looming further down the line. The era of the electric car is coming closer to us so expect to see larger numbers of electric cars on Dublin roads in 2018.

The news that Governments in some European countries are to ban the sale of new cars with any form of internal combustion engine, be it petrol or diesel from 2030 onwards, puts the electric car into a whole new perspective. That’s just about 12 years away, or two car changes for many families.

And that prospect will force a significant re-think for new car buyers in Dublin, who need to plan their motoring investment carefully, after all the cost of owning a car comes second behind the cost of buying and running a home in the Dublin region.
In the meantime, its compact SUV time for many Dublin car buyers in 2018, and here we look at some of the options.

These will be among the best-selling cars for Dublin 2018 and some of these new generation models will stand out for their sheer design style.

BMW aims to break new ground with the new X2 SUV addition to the BMW X model range. The car’s chassis and xDrive intelligent all-wheel-drive system claims to deliver a balance between sporting dynamics and efficiency and entry prices start at €50,320.
The new BMW X2 is two centimetres shorter and more than seven centimetres lower than the BMW X1, yet has the same wheelbase. Featuring short overhangs, it also has a stretched, coupe-style roofline and slim window graphic.

The car’s driving responses can be adapted by using the Driving Experience Control switch, allowing the driver to choose between default COMFORT mode, efficiency-enhancing ECO PRO mode and SPORT mode. The pre-programmed set-up available via SPORT mode claims to give the car even more dynamic steering and engine responses.

From January, the X2 xDrive20d diesel variant will be available. It generates maximum output of 190bhp and 400Nm of torque enabling a zero to 100km/hr time of 7.7 seconds. Official fuel consumption is still highly impressive 4.6l/100km (61.4mpg), while CO2 emissions are as low as 121g/km.

The 20d diesel model comes equipped with xDrive intelligent all-wheel drive as standard. The integral Hill Descent Control feature enables the BMW X2 to automatically maintain a desired speed on steep descents by taking care of brake control for the driver, who can then devote their attention to the task of steering.

The car is equipped with BMW ConnectedDrive and BMW ConnectedDrive Services, both of which are now available in updated form. Further variants of the BMW X2 will be added to the Sports Activity Coupe’s line-up in early 2018 in the shape of the four-cylinder X2 sDrive20i, X2 sDrive18d and X2 xDrive18d.

The new Jaguar E-PACE is the newest member of Jaguar’s SUV family. This five-seat SUV packs the design and performance of a Jaguar sports car into a practical and connected all-wheel-drive vehicle. The exterior design has the distinctive Jaguar grille, muscular proportions, short overhangs and powerful haunches while optional 21-inch alloy wheels give the E-PACE a bold and purposeful stance.

The E-PACE claims to be one of the most connected and intelligent vehicles in its class. The next-generation touchscreen infotainment system connects customers to their favourite apps, such as Spotify through Jaguar Land Rover’s InControl apps.

Under the bonnet, E-PACE is available engine options from the Ingenium petrol and diesel engines. The 300bhp Ingenium petrol turbo engine powers E-PACE from 0-100km/hr in just 6.4 seconds before reaching an electronically-limited top speed of 243km/hr. For customers who want greater efficiency, the front-wheel drive 150bhp Ingenium diesel delivers CO2 emissions of 124g/km and annual road tax of €270.

The new Jaguar E-PACE comes with a limited edition introductory launch price of €36,000 for the E-PACE 2.0D i4 150PS Manual model. 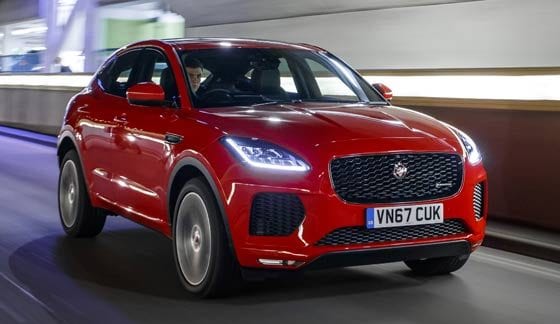 Citroen launched its new C3 Aircross compact SUV at Dublin Citroën dealerships in advance of the January registration period with entry prices starting at €20,695. This new generation SUV has been influenced by the Citroën Advanced Comfort programme and uses the latest in grip control technology with hill descent assist for added driver control. It comes with a new continuous connectivity system that includes wireless smart phone charging.

Citroën claims that the new C3 Aircross offers best-in-class space for maximum passenger comfort, with generous legroom in the front and rear, as well as an exceptional modular boot space with a volume of up to 520 litres. The new C3 Aircross also scored maximum 5 Euro NCAP rating for car safety for models fitted with either Safety Pack 1 or Safety Pack 2.

The car has a practical interior with a split sliding and folding rear bench, 60/40 split-folding and adjustable seat backs.
The new Citroen C3 Aircross is available with either PureTech petrol and BlueHDi diesel engines, as well as the latest generation EAT6 fully automatic gearbox as a further option. 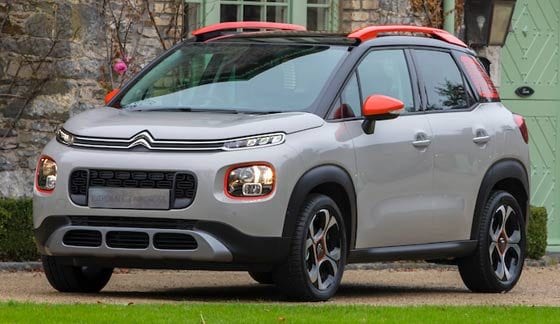 Volvo Popped Up on Grafton Street

If you’ve been on Dublin’s Grafton Street in the weeks before Christmas you’ll have seen Volvo Car Ireland’s car pop-up shop. The new shop provided visitors with a chance to see Volvo’s new XC40 compact SUV, Volvo’s first ever entry in the small premium SUV segment.
Designed primarily for the city, it features much of the advanced connectivity, entertainment and safety technology from Volvo’s newest 60- and 90 series cars, the XC60, S90, V90 and XC90.

It is also powered by Volvo’s efficient Drive-E engines, and is offered with front- or all-wheel drive, and with manual and automatic gearboxes.
Three petrol and two diesel engines will initially be available, with power ranging from 150 to 250bhp.

All these engines are 2.0-litre, four-cylinder units; there are 156hp T3, 190 hp T4 and 247bhp T5 petrol engines, and 150bhp D3 and 190 hp D4 diesels. The T3 is available exclusively with front-wheel drive, while the D3 is offered in front- or all-wheel-drive form. The T4, T5 and D4 come with all-wheel drive and an automatic gearbox. An automatic gearbox is also available on D3 versions. 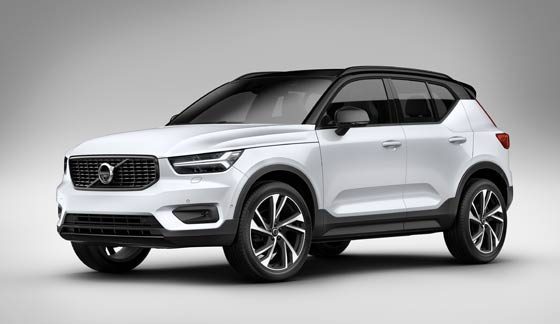 Subaru’s XV crossover for 2018 is claimed to be totally new from the ground up, inside and out and from top to bottom. The changes include a new platform with a new suspension system, a new Subaru Boxer engine and a new transmission. The car has a redesigned exterior and claims a more spacious, more comfortable and more connected passenger cabin. 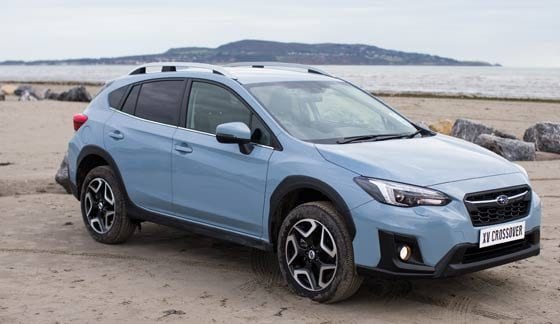 Hyundai buyers will have had a peek of the new Kona SUV from November and now have a opportunity to take on to the road. The new Kona is smaller than the best-selling Tucson and claims to offer a completely new compact SUV platform.

The early edition models will be offered with a 1.0-litre turbo petrol engine rated at 120bhp and a six-speed manual gearbox with starting prices from €20,995. Hyundai will be offering the Kona with a 1.6-litre turbo-diesel engine later in 2018 followed by a full electric version in 2019.

This new Kona will be available in four trim levels, Comfort, Executive, and two Premium versions, a manual and automatic gearbox version. All cars come on 16-inch alloy wheels and include a lane keep assist and a driver fatigue warning system. 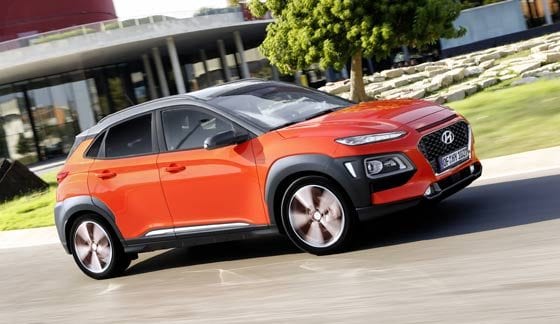 Volkswagen T-Roc to turn heads in 2018

Volkswagen’s new T-Roc crossover model is going to attract a lot of attention when it takes to Dublin roads in 2018. This new mid-size crossover comes with a starting price of €24,750, which in itself will attract enough attention.

Volkswagen will be offering a range of packs around the T-Roc model. These include the T-Roc Design version which also features the 1.0-litre TSI 115bhp petrol engine and adds 16” Chester alloy wheels, a larger Composition Media radio system featuring an 8-inch glass touchscreen, a chrome package, Voice Control and App Connect amongst others for slightly higher price of €26,995.

Volkswagen will also offer a number of Technology Upgrade Packs for the T-Roc. With these Option Packs, customers can make savings on a number of popular optional extras.
For the entry level T-Roc specification the Technology Upgrade Pack includes; adaptive cruise control, front fog lamps and 16-inch Chester alloy wheels for €599, a claimed saving of €639 over the items individually. 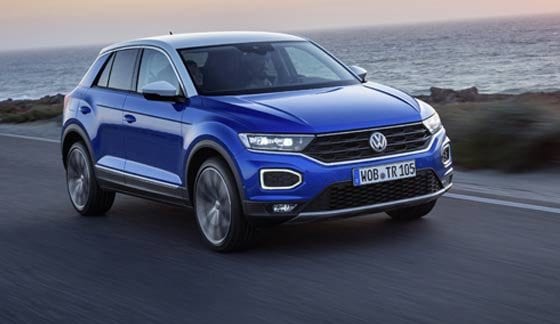 Top of the Barbershops

Blooming at the races

11/07/2013
We use cookies to ensure that we give you the best experience on our website. If you continue to use this site we will assume that you are happy with it.Ok