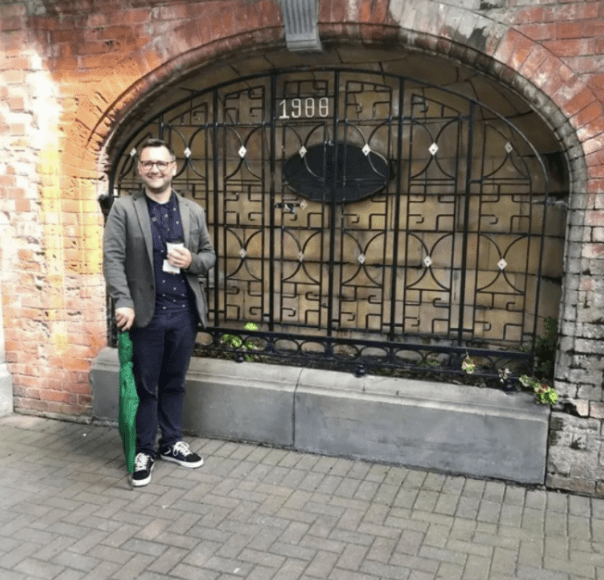 For tour guide and founder of AB Tours, Alan Byrne, his love of history and his native city always ran hand in hand.

Having studied history as a mature student, followed by a Masters, the Tallaght man’s huge interest in Dublin’s history was ignited by his late grandfather, Christopher Byrne.

“He was from Ringsend,” Alan told Dublin Gazette. “He loved Dublin and he took my brothers and I around the city from an early age.

“I was 14 when he died but he introduced us to culture, literature, art and history – a huge influence on my life”.

Having freelanced for existing tour companies for over three years, last year Alan decided to give it a go himself. He decided to put his PhD on hold, and achieved a national tour guide badge/course with Fáilte Ireland.

“I established AB Tours initially for locals who just don’t know their local history. Then people who settled here years ago wanted to learn about their adopted city.

“Alas, Covid hit and tours from March to the end of June were cancelled. Many US families had booked a year in advance – the Americans plan well ahead – but most of them are rebooked for next year.”

Alan says: “AB Tours is less about major attractions but more about hearing the stories behind the iconic buildings – Christ Church Cathedral where Strongbow is buried, along with the heart of Blessed Laurence O’Toole, the patron saint of Dublin.

“I love telling the more human stories about the 1916 Rising, about women who featured strongly in the uprising; some women were in charge of garrisons, and played a huge role in the Easter events.

“I’ve also been asked about Ireland’s social history, that is, the catholic and conservative landscape, how divorce and the equality of marriage came in with ease.

“The landscape changed so quickly. I took them down to see Oscar Wilde’s former home at Merrion Square (the LGB history goes way back).

“I include some background on Archbishop John Charles McQuaid, he also ruled the country with an iron glove. Even prominent politicians were fearful of him.

“There are lots of Viking connections too; did you know there is a Dublin link to the War of the Roses and in turn, the popular Games of Thrones?

“New excavations last year and at the Wood Quay in the 1970s shed light on the foundation of the city by the Vikings.”

To learn more of the stories behind the streets and landmarks we pass every day in Dublin, check out AB Tours on Facebook and Instagram: @abtoursdublin Website: abtoursdublin.com E: [email protected]

Paj: “I had a vivid sense of my place in the world even before lockdown”